This is Mr Modi’s fifth visit to Nepal since 2014 when he became India’s PM, and his first since his 2019 re-election 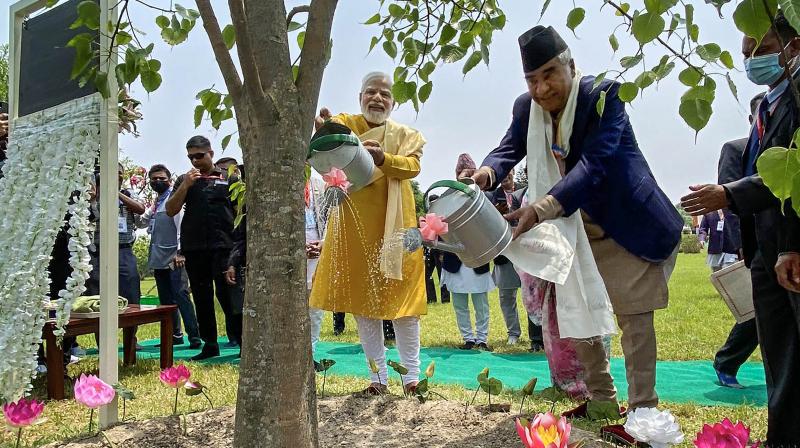 Lumbini (Nepal):  Prime Minister Narendra Modi along with his Nepalese counterpart Sher Bahadur Deuba on Monday performed the shilanyaas ceremony for the construction of the India International Centre for Buddhist Culture and Heritage in the Lumbini Monastic Zone here.

The Centre will be constructed by the International Buddhist Confederation (IBC), New Delhi, on a plot allocated to IBC by the Lumbini Development Trust (LDT), under an agreement between IBC and LDT signed in March 2022, the Ministry of External Affairs (MEA) said in a statement.

After the shilanyaas ceremony, which was performed by monks belonging to three major Buddhist traditions, Theravada, Mahayana and Vajrayana, the two Prime Ministers also unveiled a model of the Centre, he said.

Once completed, the Centre will be a world-class facility welcoming pilgrims and tourists from all over the world to enjoy the essence of spiritual aspects of Buddhism.

It will be a modern building, NetZero compliant in terms of energy, water and waste handling, and will house prayer halls, meditation centers, library, exhibition hall, cafeteria, offices and other amenities, the MEA added.

PM Modi on Monday arrived in Nepal for a brief visit to Lumbini, the birthplace of Gautam Buddha, and also hold comprehensive talks with his Nepalese counterpart Sher Bahadur Deuba to expand bilateral cooperation in multiple areas, including in hydropower, development and connectivity.

"Landed in Nepal. Happy to be among the wonderful people of Nepal on the special occasion of Buddha Purnima. Looking forward to the programmes in Lumbini," Prime Minister Modi said on Twitter.

Modi, who is in the Himalayan nation at the invitation of Deuba, is paying a day-long visit to Lumbini on the occasion of Buddha Purnima. It is the prime minister's fifth visit to Nepal since 2014. Modi and his entourage arrived here on a special Indian Air Force helicopter from Kushinagar, Uttar Pradesh.

Lumbini, located in the Terai plains of southern Nepal, is one of the holiest places of Buddhism, as Lord Buddha was born there.

During the visit, he will visit the sacred Maya Devi temple and deliver an address at the Buddha Jayanti celebrations organised by the Lumbini Development Trust.

The visiting Prime Minister will also participate in the foundation laying ceremony for the construction of a centre for Buddhist Culture and heritage within the Lumbini Monastic Zone.

"During the meeting, they will exchange views on Nepal-India cooperation and matters of mutual interests," according to a statement issued by Nepal's Ministry of Foreign Affairs.

In a statement on Sunday, Modi said he was looking forward to meeting Nepalese Prime Minister Deuba again after their "productive" discussions during his visit to India last month.

Both sides will continue to build on the shared understanding to expand cooperation in multiple areas, including in hydropower, development and connectivity, he said.

"Our ties with Nepal are unparalleled. The civilisational and people-to-people contacts between India and Nepal form the enduring edifice of our close relationship.

"My visit is intended to celebrate and further deepen these time-honoured linkages that have been fostered through centuries and recorded in our long history of intermingling," Modi said in his departure statement on Sunday.

On Friday, Foreign Secretary Vinay Mohan Kwatra said Prime Minister Modi's talks with his Nepalese counterpart Deuba at Lumbini in Nepal on May 16 will have a comprehensive agenda to further expand cooperation in multiple areas including hydropower and connectivity.

Deuba was in Delhi last month in his first bilateral visit abroad after becoming prime minister for the fifth time in July 2021.

During the visit, which was aimed at injecting fresh momentum into bilateral ties, Deuba held talks with Modi on a number of key issues, including the boundary issue.

Nepal is important for India in the context of its overall strategic interests in the region, and the leaders of the two countries have often noted the age-old "Roti-Beti" relationship.

The landlocked Himalayan nation shares a border of over 1,850 kms with five Indian states - Sikkim, West Bengal, Bihar, Uttar Pradesh and Uttarakhand. Nepal relies heavily on India for the transportation of goods and services.