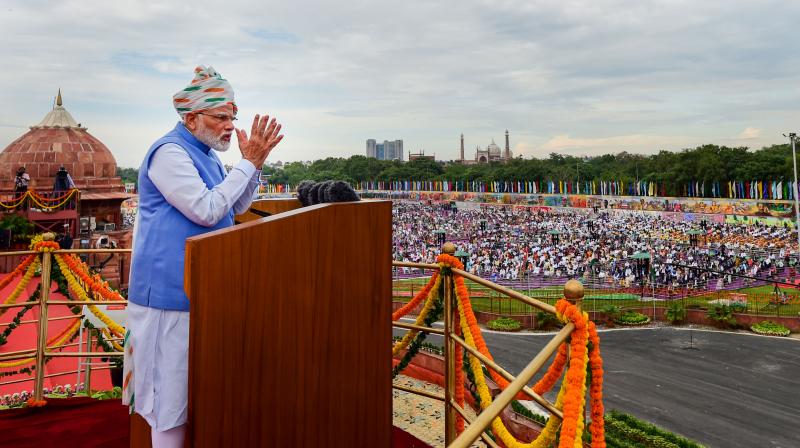 New Delhi: As India, one of the fastest growing economies in the world, completed 75 years of Independence on Monday, Prime Minister Narendra Modi set the target to be among the developed countries in another 25 years.
Addressing the nation from the rampart of the Red Fort, PM Modi laid down five resolves — terming them as “Panch Pran” — for the “Amrit Kaal”. He spelt out the pledges as a resolve for a developed India: liberate ourselves from slavery mindset, be proud of heritage and legacy, ensure unity in diversity and carry out a citizen’s duties. During his speech, he mentioned corruption and nepotism as the major challenges before the Indian society and urged countrymen to respect women.

“Two big challenges we face today — corruption and ‘parivaarvaad’ or nepotism. Corruption is eating our country like a termite and we have to fight it. We have to raise awareness against ‘parivaarwaad’ to realise the strength of our institutions and to take the nation forward on the basis of merit,” said the PM. Mr Modi said nepotism or dynasty is not only there in politics but is being nourished in other Indian institutions as well and this is harming the immense talent pool of the country. He added those who are legitimate contenders of opportunities get sidelined due to nepotism. “In politics too, family bias or dynasty has done the most injustice to the country’s strength. It becomes a way to benefit only the family and has no connection towards the national good,” said the PM.
Wearing a white “saafa” with saffron and green colours on it, the PM began his speech after hoisting the tricolour at the Red Fort at 7.30 am and it ended around 9.08 am. This wasn’t among Mr Modi’s longest speeches as his longest I-Day speech was in 2016, which lasted approximately 94 minutes while in 2020 his speech was of nearly 92 minutes.

Addressing the crowd that had gathered at the Red Fort, PM Modi called upon the collective strength of 130 crore citizens to take forward India in a big way and ensure that it is a developed nation in the next 25 years. He mentioned that for the first time after 75 years, a made in India cannon saluted the tricolour from the Red Fort.

“As we wake up to this auspicious morning of the 76th Independence Day, we must resolve to make India a developed nation in the next 25 years… This should be our resolve. We will develop a people-centric system in every parameter of development and we will have every human being and his hopes and aspirations at our centre. We know that when India makes great resolutions, it also implements them,” the PM said.

“I believe we must focus our attention on the ‘Panch Pran’ for the coming 25 years. And we must take up the responsibility of fulfilling all the dreams of the freedom fighters by embracing those ‘Panch Pran’ by 2047 when the country celebrates 100 years of independence,” Mr Modi added.

Mr Modi also urged people to pledge not to do anything that lowers the dignity of women, saying a mentality to insult them in speech and conduct has crept in.

He said respect for women is an important pillar of India’s growth and stressed the need to extend support to “nari shakti” to ensure the country’s swift progress.

Underlining the importance for unity, Mr Modi said people have to celebrate the diversity of a big country like India as the country’s many faiths and traditions are its pride.

Gender equality is the first condition for unity, he said, adding that women are now doing very well in different sectors, including science and people’s representation.

During the course of his speech, he took the names of several freedom fighters and their contribution to India’s independence. He mentioned India’s first PM Jawaharlal Nehru, Mahatma Gandhi, Netaji Subhash Chandra Bose along with Sardar Vallabhbhai Patel, Ram Manohar Lohia, Veer Savarkar for their contribution in India's independence and nation-building.