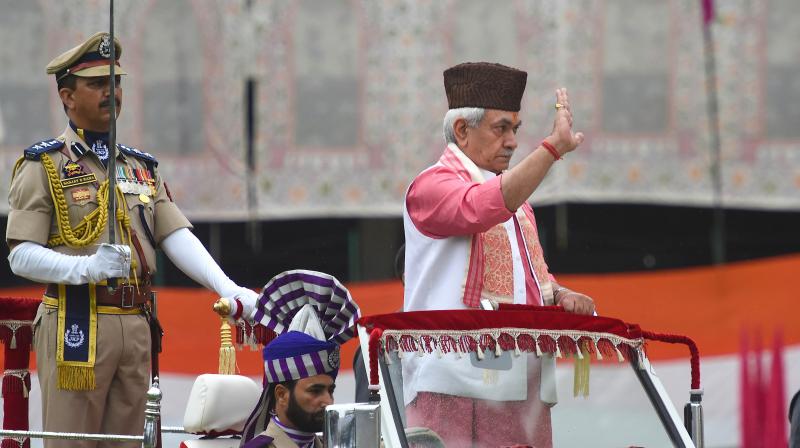 SRINAGAR: Lieutenant Governor Manoj Sinha said on Monday that the security forces, vowing to dismantle the terror network, had launched a decisive assault against separatist militants in Jammu and Kashmir.

“All attempts by the neighbouring country to destabilise J&K are being dealt with professionally by our security forces who are working day in and day out to dismantle terror network and cement peace and make it a permanent feature,” he said while speaking at the Independence Day ceremonial parade at highly fortified Sher-i-Kashmir Cricket Stadium here.

Elaborate security arrangements were in place all over J&K particularly the Kashmir Valley which has in the past remained the hotbed of anti-India and pro-freedom campaigns and continues to witness clashes between separatist militants and security forces routinely.

The security forces had sealed Srinagar’s city centre Lal Chowk (Red Square) and its neighbourhood and side streets leading to the place which carries its own significance, for, besides being the business hub of the Valley’s main town, it has often been used for political articulation during the past seven-and-a-half decades.

On Monday, groups of political activists owing allegiance to the BJP or like-minded parties and students relocated to Lal Chowk to wave the Tricolour and sing the National Anthem. ‘Ghanta Ghar’ or clocktower at Lal Chowk was illuminated in the Tricolour on the eve of Independence Day. Elsewhere in Srinagar and in many other parts of the Valley, a shutdown and early morning thunderstorms brought life to a standstill.

Lt. Governor Sinha said that peace was prevailing in J&K and the Union Territory is touching new heights of development. He said that no civilian was killed in a law-and-order situation in the last three years “for which I want to congratulate the security forces”.

He reiterated that stone pelting, hartals, and the closure of educational institutions is history now as democracy is flourishing in J&K after witnessing three decades of turbulence. “Stone pelting on roads, hartals and closure of schools and colleges is history now. Out of 365 days a year, 100 days would witness hartals taking a toll on business and the education of children. But now, J&K is heading towards peace and prosperity. Bazaars remain open till late night and transport plies normally including in the evening hours. There is no fear, and the common man has heaved a sigh of relief,” he asserted.

He also said that his government is determined to encourage morality and accountability in the administration. “Those people who would take advantage by resorting to wrong means can't do it anymore. The guilty will not be spared but those who are innocent will not be touched”, he said to explicate the offensive launched by the government against bribery and corrupt officials.

Earlier in his customary speech on the eve of Independence Day, Sinha while referring to the abrogation of Article 370 said that Prime Minister, Narendra Modi, had lit a lamp of modern economic and social development of J&K three years ago. He added that the J&K administration has achieved notable accomplishments during this period.

“Despite various challenges, we have completed 50,726 projects in the last financial year with a five times speed,” he said and while calling it a “new dawn of hopes and dreams”, insisted that J&K is “scripting history and recording unprecedented performance in every sector.”