Gandhi attacked the government while addressing a public meeting here after carrying out a 15-km roadshow. 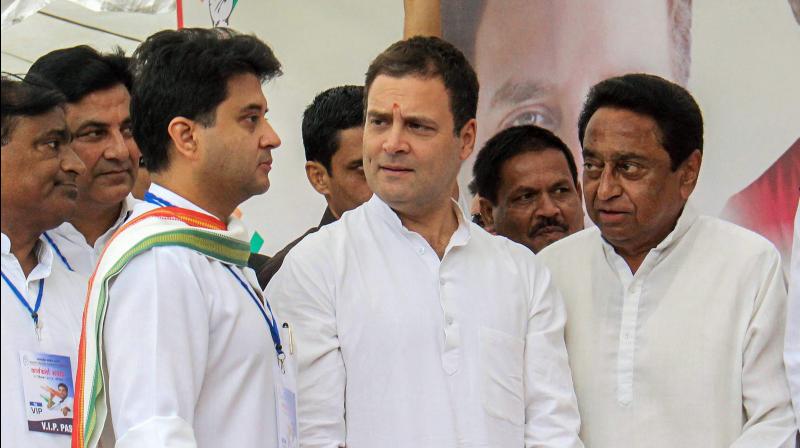 Bhopal: Holding a 15-km roadshow in poll- bound Madhya Pradesh, Congress President Rahul Gandhi on Monday termed the demonetisation as the "biggest scam" of the Modi government to convert black money into white.

Gandhi held the four-hour-long roadshow after performing 'puja' and taking blessings from 11 priests.

Travelling in a bus, the 48-year-old leader criss-crossed several areas of Bhopal, passing through the roads which were decorated and had party banners like the ones describing Gandhi as a 'Shiv bhakt' (a devotee of Lord Shiva).

The roadshow was the virtual launch of the Congress campaign for the assembly polls slated later this year, in which his party has the toughest task of dislodging the BJP which has been ruling the state for the last 15 years.

Thousands of Congress workers and local residents flanked the roads and jostled to catch a glimpse of Gandhi, who was accompanied by senior party leaders, including state Congress president Kamal Nath and state party's campaign panel chairman Jyotiraditya Scindia.

En route, he had a brief halt to have tea and 'samosa' at a roadside stall near Sadar Manzil.

He also posed for a selfie with the tea stall owner and his staff, Congress MLA from Indore Jitu Patwari told PTI.

After the roadshow, Gandhi addressed a public meeting, during which he attacked the Modi government over demonetisation, GST, Rafale fighter deal and farm loan waiver.

"Demonetisation was the biggest scam that the government of Prime Minister Narendra Modi has undertaken in four years which the Congress had not done in the last 70 years," the Congress leader said at the BHEL Dusshera Maidan.

Modi had on November 8, 2016 announced demonetisation, under which the Rs 500 and Rs 1000 currency notes existing then were scrapped with immediate effect.

"The scam was aimed at taking out money from the small traders to put into the pockets of 15 richest persons of the country," Gandhi alleged.

He asked the gathering, "Have you seen people like Vijay Mallya or Anil Ambani standing in queues after demonetization?"

Only the honest people of the country stood in the queues, he said.

He claimed that the BJP-led government has waived loans worth Rs 1.5 lakh crore which was the NPA of 15 big industries.

He questioned why the loans of farmers, who "have borrowed just Rs 5000", could not be waived.

"Those who took loans in lakhs and crores were called as 'Non-Performing Assets (NPA)', but when a farmer fails to pay Rs 5000 loan, you term him as 'defaulter'," Gandhi said.

"When Congress comes to power in the country, it will waive the entire loan of farmers. The Congress had already done so by waiving Rs 70,000 crore loan earlier of the peasants," he said.

Describing GST (Goods and Services Tax) as 'Gabbar Singh Tax', Gandhi alleged that it too was an attempt to take out money from the small traders for putting into the pocket of 15 richest persons of India.

Referring to the Rafale fighter jet deal, the Congress president claimed that the Prime Minister had failed to see in his (Rahuls) eye when he "questioned" him in the Lok Sabha on the issue.

"When I was raising the Rafale deal issue in Parliament, I asked Modiji why his government has purchased these planes in Rs 1600 crore in place of Rs 700 crore, why he had given the contract to a company owned by Anil Ambani," Gandhi said.

Ambani has already rejected Rahul Gandhi's allegations and emphasised that the government had no role in the Rafale- manufacturer French company Dassault picking up his company as a local partner.

"I was looking into Modiji's eyes. But he was looking right, left, up and down and never established an eye contact on the issue," Gandhi claimed.

He also said that if the Congress comes to power, it will ensure that mobile phones and other items will be manufactured here under 'Made-in-Madhya Pradesh' and 'Made- in-Bhopal for generating jobs for the youth.

Before hopping on to a bus for the roadshow, Gandhi performed a 'puja' and took blessings from 11 Hindu priests amid chanting of mantras.

Gandhi's roadshow, after passing through the main streets of the city, concluded at the Bharat Heavy Electricals Ltd's Dussehra Maidan at around 5 pm.

A large number of security personnel were deployed along the route of Gandhi's roadshow. Besides the regular police force, an additional 1,500 policemen manned the streets of Bhopal, police officials said.

Security personnel were seen having a tough time in ensuring a smooth passage for Gandhi's vehicle amid the crowded roads.

Earlier, Gandhi was received at the airport by Nath and Scindia among others.

As he stepped out of the airport, scores of Congress workers holding the party flag chanted "Rahul Gandhi Zindabad".

The Congress president recently returned from a pilgrimage to Kailash Mansarovar. As part of the pilgrimage, devotees undertake an arduous journey to Mount Kailash, which is considered the abode of Lord Shiva in Hindu mythology.