The incident took place when army solders were moving towards Pengri, their base headquarters in Tinsukia district. 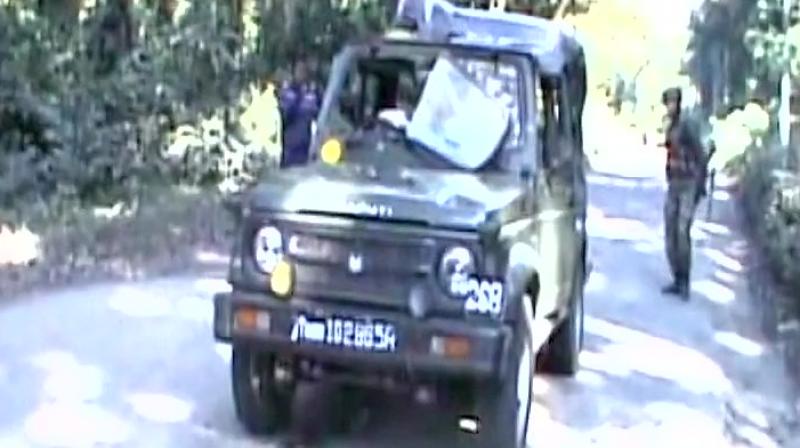 The militants first triggered an IED blast, which was followed by indiscriminate fire on a Maruti Gypsy and a truck in which army soldiers were travelling. (Photo: ANI)

Guwahati: Three army solders were killed and at least four others critically wounded in a joint attack by heavily armed rebels of ULFA (I) and NSCN (K) near Digboi in Upper Assam’s Tinsukia district on early Saturday. The army soldiers belonged to 15 Kumaon regiment.

The incident took place when army solders were moving towards Pengri, their base headquarters in Tinsukia district.

The militants first triggered an IED blast and then started indiscriminate fire on a Maruti Gypsy and a truck in which army soldiers were travelling.

Informing that incident took place at about 5.30 am, Tinsukia district SP Mugdhajyoti Dev Mahanta told reporters, “It was certainly the handiwork of anti-talk faction of Ulfa with the support of NSCN (K) rebels. The initial assessment suggests the involvement of at least 15 armed rebels in ambush inside the Upper Dehing reserve forest.”

The army PRO Lt. Col Suneet Newton told this newspaper that army soldiers were carrying out counter-insurgency operations. “The militants had planted IED on the road which blew up 2.5 ton truck. Soon after the IED blasts, the militants also opened indiscriminate fire on army soldiers,” he said adding that army has launched massive combing operations in the area to nab the ultras involved in the attack.

There was ‘heavy shelling’ on the two army vehicles as they were moving from Pengeri towards Digboi. “There was heavy shelling from inside the jungle. They also used an IED, apart from firing with Rocket Propelled Granades (RPG) and at least one grenade,” police said.

The injured army solders were airlifted to a nearby army base hospital with multiple injuries. Security sources said that taking the advantage of thick forest cover, militants managed to escape soon after the ambush.

Assam chief minister Sarbananda Sonowal who described it a cowardice act of militants directed Additional Director General of Police Mr Mukesh Shah to rush to Tinsukia to coordinate the combing operations. Mr Sonowal said that militants responsible for the attack should not be spared.

It was only on Wednesday that a group of ULFA (I) rebels had upon a van that was on its way to the bank to collect cash for disbursement of wages for labourers of the Pengeri tea estate.

It is significant that this was the first major offensive of ULFA (I) rebels in the state since BJP government came to power in May this year.