'We do not know who is planning what, and at what stage the plans are. We need to take all precautions,' Rajnath said. 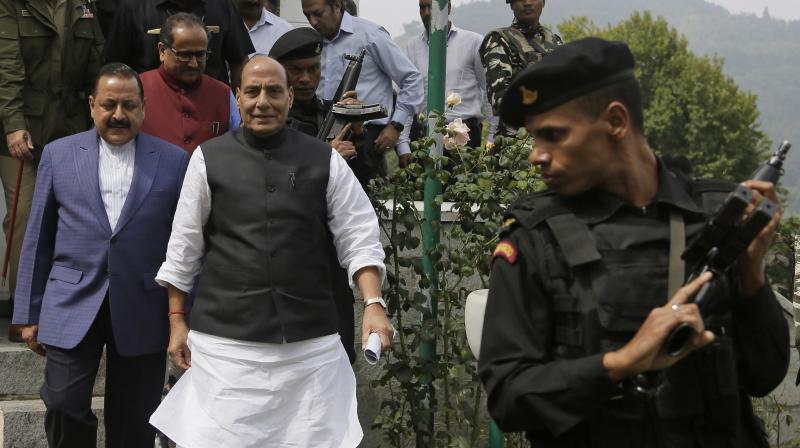 Rajnath Singh said PM Modi had not said anything about any threat to him. '... but, as home minister, I have taken the initiative to beef up his security. (Photo: PTI)

New Delhi: Home Minister Rajnath Singh said the security of Prime Minister Narendra Modi had been beefed up following reports of Maoists planning an attack on him.

"We do not know who is planning what, and at what stage the plans are. We need to take all precautions. I have already set up a committee to review the prime minister's security and it is going to be a continuous process. After we received certain inputs, we tightened his security further," he said.

In an interview to 'The Week' magazine, Rajnath Singh said PM Modi had not said anything about any threat to him. "... but, as home minister, I have taken the initiative to beef up his security. He is the prime minister of the country and it is our responsibility to take care of his security."

A letter allegedly found in the house of one of the five people arrested for "links" with the banned CPI (Maoist) talked about the ultras mulling "another Rajiv Gandhi incident".

Responding to a question about the internal security situation in India, the minister said as far as the northeast insurgency was concerned, the security problem was normalised and there was a 95 per cent improvement.

As far as left wing extremism (LWE) was concerned, there was a 55-60 per cent improvement, he said, adding that 75 per cent of the problem was concentrated in only ten districts.

To a question on the alleged growing sense of alienation among minorities, Singh said no one could be allowed to discriminate on the basis of caste, sect or religion.

"The kind of tolerance India has shown when it comes to religion, I don't think exists anywhere else in the world... Our policy is justice to all, and appeasement of none. The BJP also has the support of the minorities," he said.

Responding to a question on the alleged rise in intolerance and assertion of majoritarianism, Singh said though there had been a few incidents of lynching, "it is not as if too many incidents have happened in such a big country. These have happened in the past as well".

He said law and order was a state subject and the Centre issued advisories to states from time to time to act very strictly in such cases. "We have asked state governments to take such incidents very seriously."

On the issue of the long-delayed Naga Accord, the home minister said he was confident that it would see the light of the day. "Our effort is to reach a final solution and we cannot rule out the possibility of a final accord before the Lok Sabha elections," he said.

He also rejected suggestions that the government was trying to impose Hindi, saying India was a multilingual country and "we cannot impose anything".