The passengers travelling in the two coaches said all their belongings including cash and other valuables were destroyed in the fire. 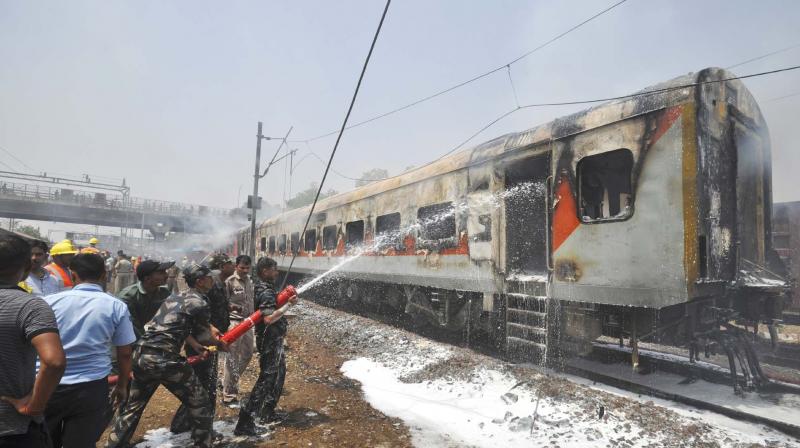 Rescue workers try to douse a fire which broke out in two bogies of Andhra Pradesh AC Superfast Express in a train near Gwalior on Monday. (Photo: AP)

A railway spokesman said the fire started from B-6 coach of the Delhi-Visakhapatnam train and spread to B-7 coach in no moment, causing panic among the passengers.

“All the passengers were rescued. No one was injured in the mishap,” North Central Railways chief public relations officer Gaurav Kumar Bansal told the media.

“The fire appears to have started from the roof mounted packaged unit —  the railway terminology for an air-conditioning unit in a coach) above the toilet of the B-7 coach,” a top railway official said on the condition of anonymity. The official was quoting the prima facie investigation report.

Railway PRO Manoj Kumar Singh was quoted by the local media as saying that a high-tension wire fell on the train causing breaking out of the fire. Two coaches of the train, B-6 and B-7 were completely gutted.

The passengers travelling in the two coaches said all their belongings including cash and other valuables were destroyed in the fire.

The police said the fire in the train was noticed at 11.50 in the morning.

Fortunately, the train was on halt. The fire was extinguished with the help of National Disaster Relief Force personnel and fire tenders.

The incident took place near Birla Nagar railway station, around two km from Gwalior railway station. “All the passengers including the deputy collectors who were returning from training are evacuated to safety,” Gwalior district superintendent of police Navneet Bhasin said. Alternative arrangements were for the passengers travelling in the two affected coaches.