The agitated farmers also blocked a busy road in the area by throwing burning tyres on it, a police official said. 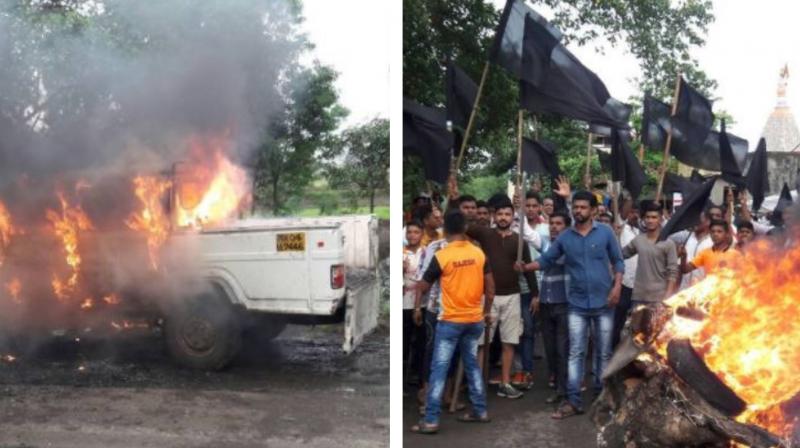 Farmers protest turned violent after they claimed their land is being acquired by Ministry of Defence. (Photo: ANI | Twitter)

The agitated farmers also blocked a busy road in the area by throwing burning tyres on it, a police official said.

A Defence spokesperson said the land is owned by the Ministry of Defence and the state government land records certify the same.

The state government had some years back started acquiring land in the area to set up the proposed airport which the farmers have been opposing.

However, their protest turned violent on Thursday as the farmers started agitating simultaneously at several places near Nevali, located about 50 kms away from adjoining Mumbai.

The angry protesters also clashed with police and pelted security personnel with stones when they tried to control the situation, the police official said. Three police officers and a constable sustained injuries in the clash, he said.

Policemen also fired plastic bullets at the protesters to disperse them, police said.

The protesters blocked the Kalyan-Haji Malang road in the area by throwing burning tyres and wooden blocks on it.

They also torched a police van, three trucks, two bikes and a tempo in the area, the official said. Senior police and revenue officials rushed to the spot to control the situation.

The aggrieved farmers had earlier this month approached the Bombay High Court with a bunch of petitions challenging acquisition of over 1,600 acre land by the Ministry of Defence for an airport requisitioned during World War II.

According to the petitions, the land was requisitioned by the government through an order passed by the then Thane collector in February 1943, under the Defence of India Rules.

The petitions have challenged the validity of the requisition order.

The Defence spokesperson said, "The land in reference is owned by Ministry of Defence/Indian Navy and the state government land records certify the same."

"The 7/12 (land) extracts are held with Defence Estate Officer, Mumbai. The land was acquired by the Ministry of Defence," he said.

"The Navy is constructing a peripheral boundary wall to protect and safeguard defence land from further encroachment," the spokesperson further said.

"The Maharashtra government is fully aware of the subject case and is providing police protection and support from the state/district administration and revenue authorities," the spokesperson said.