It is learnt that the envoys of the US, Russia, France and Japan were among those who were part of the briefing 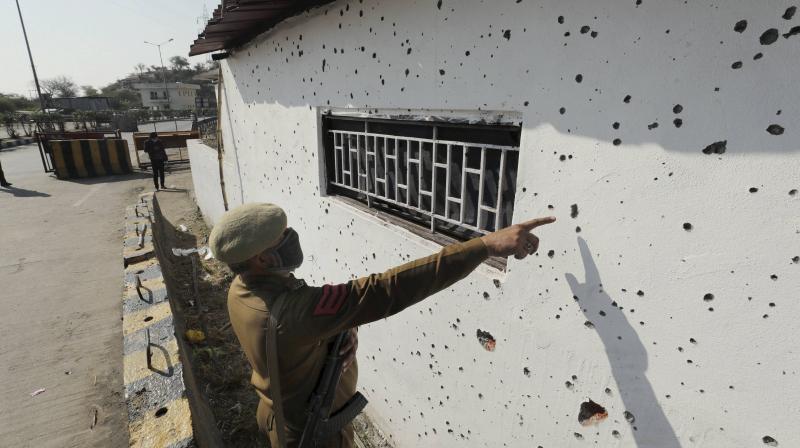 Jammu & Kashmir police personnel show a damaged wall of a police post after an encounter in Nagrota yesterday, in Jammu district. (PTI)

New Delhi: Foreign Secretary Harsh Vardhan Shringla on Monday briefed a group of foreign envoys, including from the US, Russia and France on the planned terror attack by Pakistan-based terrorist group JeM in Nagrota in Jammu which was foiled by security forces on November 19, sources said.

These heads of missions were provided with a comprehensive "information docket" giving the details of the incident, and also list of items and munition recovered from terrorists, clearly indicating their Pakistani origins.

They were also briefed on how the terrorists got into India which is now clear through the discovery of an underground tunnel in the Samba sector in Jammu and Kashmir, sources said.

It was shared with the heads of missions how preliminary investigations by the police and intelligence authorities led India to believe that the terrorists who had planned the attacks in Nagrota belonged to Pakistan-based Jaish-e- Mohammad, a terrorist organisation proscibed by the UN, they added.

It is learnt that the envoys of the US, Russia, France and Japan were among those who were part of the briefing.

The envoys were briefed about markings on the recovered AK47 rifles and other items, sources said.

The foreign secretary also briefed the envoys about the possible implications of these planned attacks on security, diplomacy and the battle against terrorism, they said.

Four suspected JeM terrorists, who were hiding in a truck, were killed by security forces near Nagrota in an encounter on Thursday morning after which the government asserted that a major terror attack was foiled by the Indian security forces.