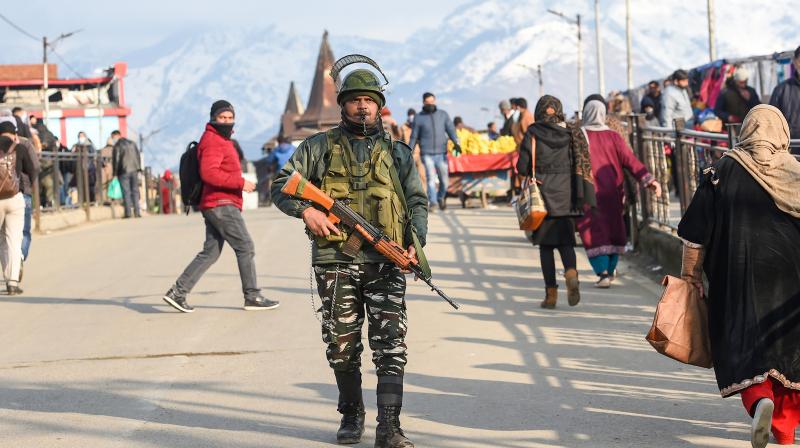 SRINAGAR: Even as security across Jammu and Kashmir has been heightened ahead of Republic Day, suspected militants succeeded in breaching it by exploding a hand-thrown grenade at a police vehicle in a busy marketplace in summer capital Srinagar on Tuesday, leaving a police official and three civilian pedestrians including a wife-husband duo injured.

The police and witnesses said that unknown assailants tossed the hand-grenade towards the police vehicle along the Hari Singh High Street here. They said that a police inspector working with the J&K Anti-Corruption Bureau (ACB) and three civilians — two females and one male —- received splinter injuries. They were quickly taken to the hospital.

The injured police official Tanveer Husssain was reportedly being treated at a police hospital here.
Inspector General of Police, Vijay Kumar, claimed that the person who threw the grenade in the marketplace has been arrested. The police quoting him said on its Twitter handle, “Srinagar police arrested the grenade thrower, who was involved in today’s incident at Hari Singh High Street (HSHS) in which a few civilians and one policeman got injured. Investigations are on”.

Earlier during the day while speaking to reporters on the sidelines of a function here, Let. Gen. D.P. Pandey, the commander of the Army’s Srinagar-based 15 Corps, had said that the situation in Kashmir on the eve of the Republic Day was “absolutely fine” and that the people in large numbers were asking for the national flag to be carried by them on the occasion.

He said, “This is a great indicator of the mood of the people of Kashmir. This is a positive thing happening… I think there are great times ahead”. He added, “The only thing is that the people should be vigilant against the nexus, which is trying to corrupt their minds, and not listen to them in whichever form they try to instigate any such activity which is anti-national and anti-people of Kashmir.”