India   All India  26 Oct 2021  Amit Shah: No dialogue with Pakistan on Kashmir, government to talk to Kashmiris
India, All India

Mr Shah, while wearing the traditional Kashmiri woollen gown pheran in an apparent bid to touch a chord with the local population 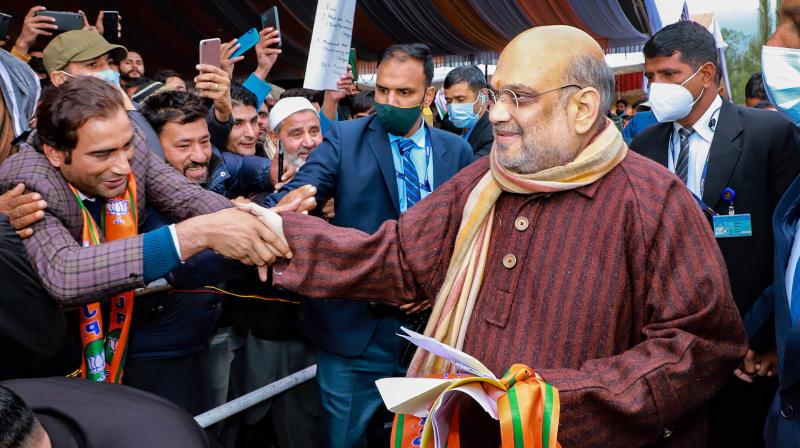 He said that militancy and violence were on the decline in J&K and the government was ensuring that stones and guns in the hands of Kashmir’s youth were replaced with books, pens and industrial tools. (PTI)

Srinagar: Union home minister Amit Shah, ending a three-day visit to Jammu and Kashmir, on Monday ruled out any talks with Pakistan on Kashmir and said that New Delhi will only talk with the people of Kashmir. Speaking at a gathering in Srinagar, he said: “Farooq Saheb (former CM Farooq Abdullah) says I should talk to Pakistan. But why should I talk with Pakistan? If we will talk with anyone, it is the people of Jammu and Kashmir, no one else.”

He said he had come to Kashmir “with his heart open for the people of the Valley”, particularly its youth. “Today, I’m speaking my heart out. I was posed a series of questions. Today, I’m speaking here without a bulletproof shield,” said Mr Shah, while wearing the traditional Kashmiri woollen gown pheran in an apparent bid to touch a chord with the local population, which is emotionally attached to the outfit.

He said the people of Kashmir had suffered enormously in the past three decades and there should be an end to the bloodshed now. “Bahut ho gaya (it is enough now). Forty thousand people have lost their lives whether they were the security forces, terrorists, civilians. Now the time has come to take yourself off this mayhem and march towards a new journey of peace, development and prosperity. I promise that J&K will get what it deserves by 2024,” he said.

The home minister said he was visiting J&K for the first time after the abrogation of Article 370 on August 5, 2019 and reiterated that he was often asked by some people why curfew was imposed and the Internet snapped then. “Let me answer them today. It was done to protect and save the lives of our youth here. We didn’t want vested interests and anti-peace elements to exploit the situation and push our youth on the roads to face bullets. I want to say (again) that this step was taken to save the lives of Kashmiri youth.”

He said that militancy and violence were on the decline in J&K and the government was ensuring that stones and guns in the hands of Kashmir’s youth were replaced with books, pens and industrial tools. “Under the leadership of Prime Minister Narendra Modi, Kashmir is evolving and witnessing a new era of peace and development. Even in Pulwama, which was the hotbed of terrorism, an AIIMS is coming up at a cost of Rs 2,000 crores,” he said, and announced a slew of measures already taken or in the pipeline for the rapid economic and industrial growth of J&K and to provide better amenities, including potable water and electricity to the residents of every village and addressing the issue of unemployment.

He said only 500 people could become doctors every year after studying in the state’s three medical colleges, two of which were established by the former maharaja and only one by the elected governments. Therefore, he added, parents would send their wards to Pakistan for obtaining medical degrees. “But now, with the spread of a network of medical colleges all across J&K, as many as 2,000 youth will become doctors every year. There will be no need for the people of Kashmir to send their children to Pakistan for medical education,” he said.

He said after the repeal of J&K’s special status, a canard was spread that the land and jobs will be snatched from the people of the erstwhile state. “Give me one example of any village where the land of any villager has been snatched. And under the leadership of (J&K) lieutenant-governor Manoj Sinha, 20,000 jobs have been provided to the youth of the Union territory and 6,000 more are on the way,” he said.

Reiterating that no one will be allowed to disturb the peace or come in the way of development in J&K now, he said: “The time has gone when terrorists would exploit the situation. No one will be allowed to kill civilians. We assure you that peace will remain intact, and development will take place in J&K.” He also said that now, unlike in the past when three families (a reference to the Abdullahs, Muftis and Gandhis) were ruling the roost, government jobs are being given only to the deserving. “The time is over when people of J&K were paying bribes to get jobs. Now only those who deserve it will get these. Nepotism and corruption are over,” he said.

He accused the “three families” and others of misleading the people of Kashmir, particularly the youth, so that they could reign supreme. He asked: “Why didn’t they raise their voice against terrorism and instead would insist on talking with the Hurriyat (Conference) and Pakistan? What has been the result of this… tourism was destroyed while a record number of 1.71 lakh domestic and foreign tourists visited J&K between March 2020 and 2021,” he said.

Without mentioning his name, the home minister said: “There was a chief minister who would leave the people suffering and spend six months in London every year. Now we have young sarpanches, panches and other representatives who can become MPs, MLAs and also the chief minister. J&K will now have a chief minister who will stay with the people.” He said: “Those questioning me on issues should answer why the youth were deprived of becoming sarpanches and panches in the National Conference and People’s Democratic Party governments”.

He asked the people to ask questions of previous rulers on the reasons for the lack of development, violence and bloodshed, alleged nepotism and corruption and other issues concerning them, and why they could not do in the past 70 years what the present government has done in just two and a half years.