India's history is not just about slavery but also about India emerging victorious, its warriors and the valour of countless greats, PM said 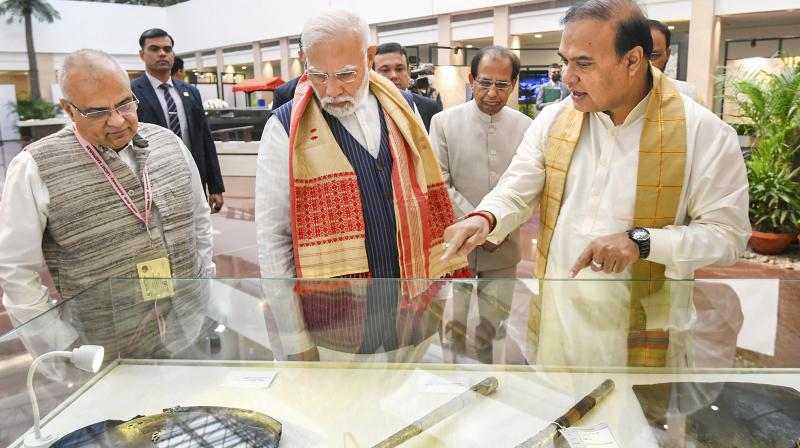 New Delhi: Prime Minister Narendra Modi on Friday said India was correcting its past mistakes by celebrating its heritage and remembering its unsung bravehearts who were lost in the pages of history written as part of a conspiracy during the colonial rule. He was speaking at the closing ceremony of the year-long celebrations marking the 400th birth anniversary of Lachit Borphukan, the legendary Ahom General, in the national capital.

Addressing the event, the Prime Minister said that the history of India is not just about slavery but also about India emerging victorious, its warriors and the valour of countless greats. Therefore, it was important that the collective sense of history was not limited to a few decades or centuries.

"India’s history is about standing against tyranny with unprecedented valour and courage. Unfortunately, even after Independence, we were taught the same history that was written as a conspiracy during the period of slavery. After Independence, there was a need to change the agenda of foreigners who made us slaves, but it did not happen," he said.

The Prime Minister noted that the stories of fierce resistance against tyranny in every part of the country were willfully suppressed. "There are countless stories of victory over tyranny during the long period of repression. The mistake of not bringing those events to the mainstream is being rectified now. The fact that this event is taking place in Delhi is a reflection of this change," he said.

The Prime Minister emphasised that when a nation knows its real past, only then it can learn from its experiences and tread in the correct direction for its future. "It is our responsibility that our sense of history is not confined to a few decades and centuries," he said.

Citing the legendary playback singer and politician Bhupen Hazarika's lines, Mr Modi said that only by repeatedly remembering we can give the coming generations a correct picture of history.

The Prime Minister complimented the Assam government for taking steps to celebrate the legacy of its heroes. He said that projects like museums and memorials in Assam to honour its heroes will help the younger generation learn about the history of sacrifice and bravery.

Remembering Barphukan, who defeated the Mughals and successfully halted the ever-expanding ambitions of Aurangzeb, the Prime Minister said, "Lachit Borphukan's life inspires us to live the mantra of 'Nation First’. His life inspires us to rise above self and give the highest priority to the national interest. His life teaches us that instead of nepotism and dynasty, the country should be supreme."

Referring to the instances from Borphukan’s life, Mr Modi said, "No person or relation is above the nation."

The Prime Minister also suggested creating a grand theatre play on Lachit Borphukan along the lines of the one on Chhatrapati Shivaji Maharaj and enacting it across the country.

"This will give a great boost to the resolution of ‘Ek Bharat, Shreshtha Bharat’. We have to make India developed nation and make the Northeast, the hub of India’s growth. I am sure that the spirit of 400th Jayanti of Veer Lachit Borphukan will give strength to our resolve and the nation will achieve its goals," he said.

The Prime Minister also released a book titled -- Lachit Borphukan - Assam's Hero who Halted the Mughals, on the occasion.

Mr Modi said: "India is celebrating the 400th birth anniversary of Lachit Borphukan at a time when the country is marking 'Azadi Ka Amrit Mahotsav'."

Terming Borphukan’s exploits a glorious chapter of the history of Assam, the Prime Minister said, "I salute this great tradition on the occasion of the festival of India’s eternal culture, eternal valour and eternal existence."

The Prime Minister reiterated India’s resolve to celebrate its heritage. "India is not only celebrating its cultural diversity but also acknowledging the unsung heroes and heroines of its history," he said.

"Immortal sons of Maa Bharati like Lachit Borphukan are the inspiration for fulfilling the resolutions of the Amrit Kaal. They make us familiar with the identity and glory of our history and also spur us to dedicate ourselves to the nation," the Prime Minister added.

During the event, Mr Sarma said: "It is a humble request to historians… India isn't just the story of Aurangzeb, Babar, Jahangir or Humayun. India is of Lachit Barphukan, Chhatrapati Shivaji, Guru Gobind Singh, Durgadas Rathore," he said adding, "We should make an effort to see in a new light. It'll fulfill our dream to be vishwaguru."