The city has been reeling under cold day conditions for the last three to four days due to rains, fog and little exposure to the sun 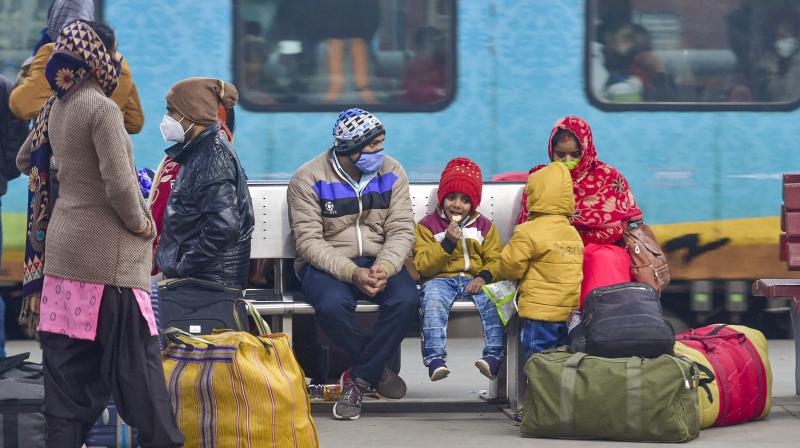 Passengers wearing warm clothes wait at a platform at a railway station, during a cold winter day in New Delhi. (Photo: PTI)

New Delhi: Delhi is likely to witness cold day conditions at isolated places on Thursday, with the city registering a drop of three degrees in the minimum temperature at 6.3 degrees Celsius, the weather office said.

According to weather officials, the city has been reeling under cold day conditions for the last three to four days due to rains, fog and little exposure to the sun.

Tuesday was Delhi's coldest January day in nine years, with the maximum temperature plunging to 10 degrees below normal and settling at 12.1 degrees Celsius.

Before this, January 3, 2013 had recorded a maximum temperature of 9.8 degrees Celsius, according to India Meteorological Department (IMD) data.

It was also the second consecutive "severe cold day" in the national capital. Wednesday was also a cold day.

A "severe cold day" is when the maximum temperature is at least 6.5 notches below normal.

There will be mainly clear sky. The city will witness cold day conditions at isolated places on Thursday, the IMD forecast said.

It said that maximum temperature of the day is likely to hover around 17 degrees Celsius.

The maximum temperature on Wednesday had settled six notches below the season's average at 16.4 degrees Celsius.

The relative humidity at 8.30 am on Thursday was 97 per cent, the weather office said.

Delhi's air quality was in poor category as its air quality index (AQI) at 8 am on Thursday was 264, the Central Pollution Control Board data showed.