Will not allow repeat of 1984 riots: Delhi HC

Police under fire for not filing FIRs, decision sought today. 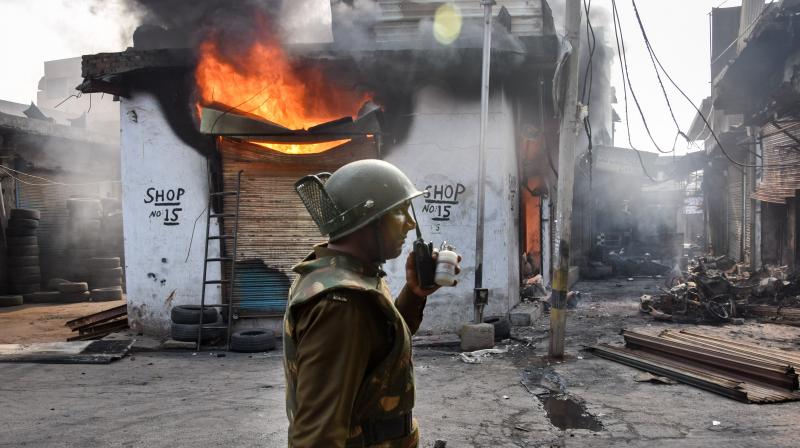 A security official stands in front of a burning shop following clashes over the new citizenship law, in Gokulpuri area of northeast Delhi on Wednesday. (PTI photo)

New Delhi: In a strongly-worded message to the government — both at the Centre and in Delhi — to work together to combat the unrelenting violence that hit parts of the nation’s capital for the fourth consecutive day, the Delhi high court on Wednesday said it “cannot let another 1984-like riot to happen” in the country. The court also expressed  “anguish” over the Delhi police’s failure to register FIRs against alleged hate speeches by three BJP leaders on the CAA-linked violence, asking the police commissioner to take a “conscious decision” on it by Thursday.

The court asked the special commissioner of police, who was present at the hearing, to forthwith convey its “anguish” to the commissioner and observed that the city had seen enough violence and it should not see another 1984-type anti-Sikh riots-like situation. “We can’t let another 1984 scenario happen in this city; not under the watch of this court”, Justice S. Muralidhar observed, adding: “We heard that one IB officer has been attacked. These things should be immediately looked into.” The court was referring to the anti-Sikh riots that killed over 3,000 people in Delhi alone.

A bench of Justices Muralidhar and Talwant Singh said when the police can register 11 FIRs in incidents like arson, looting and stone-pelting, why did it not show alacrity when it came to alleged hate speeches by three BJP leaders — Anurag Thakur (also a Union minister), MP Parvesh Verma and former Delhi minister Kapil Mishra.

The bench said: “Why are you not showing alacrity when it comes to registration of FIR in these cases?... We want peace to prevail. We do not want the city to witness another 1984 riots. This city has seen enough violence and anguish. Let it not repeat 1984.”

The court’s comment came after it watched a video of Mr Mishra, who has a history of making hate-filled communal rants, make yet another incendiary speech in northeast Delhi’s Maujpur neighbourhood on Sunday afternoon, after which major violence erupted in the area.

The court noted in its order that special commissioner Praveer Ranjan has assured he will sit with the police commissioner on Wednesday itself and view all video clips and take a conscious decision on the issue of lodging of FIRs and convey it to the court on Thursday. It made it clear it was not confining the proceedings to the video clips of these three BJP leaders, and the court will look into other clips as well.

In a local court, the Delhi police said on Wednesday that prima facie no cognisable offence was found for lodging FIRs against Mr Thakur and Mr Verma for their  alleged hate speech in relation to the anti-CAA protests at Shaheen Bagh. The submissions were made in an action taken report (ATR), filed before additional chief metropolitan magistrate Vishal Pahuja, who was hearing a complaint by CPI(M) leader Brinda Karat seeking FIRs against Mr Thakur and Mr Verma.

The court, which reserved orders for March 2 on whether to direct the police to lodge FIRs, had on February 5 directed it to file an ATR. In the ATR filed Wednesday, the police said legal opinion had been sought in the matter and requested the court to grant more time to file the final report, court sources said. The report said the word “gaddar” (traitor), used in the rally by Mr Thakur, “does not point to any particular section of society... Surmises and conjecture cannot be the basis for initiating any legal action”.

In the Delhi high court, the jam-packed courtroom saw heated arguments between solicitor-general Tushar Mehta and Delhi government standing counsel Rahul Mehra, on who would represent the police commissioner. Both Mr Mehra and Mr Mehta differed on the issue of registration of FIRs over the hate speeches. While Mr Mehta said the court should wait for the response of the authorities on lodging FIRs against the three BJP leaders, Mr Mehra said there was no reason not to do so and FIRs should be registered against everyone involved in the violence.

Mr Mehta said he has spoken to the highest authority and any decision taken by the court now may aggravate the situation. Mr Mehra, however, felt that FIRs should be registered at this stage if a cognisable offence had been committed and later, if enough evidence is not found, the police can file a cancellation report.

At least 27 people have been killed, including a Delhi police officer and an Intelligence Bureau officer, and about 200 people have been injured in the clashes, which began Sunday afternoon as groups for and against the controversial citizenship law clashed in Maujpur, where Mr Mishra was speaking.

The court said the highest constitutional functionaries who move with Z-security should reach out to affected people to give them confidence that law was functioning. The court also urged Delhi chief minister Arvind Kejriwal and deputy chief minister Manish Sisodia to visit the affected areas for “confidence-building measures”, and instructed the Delhi police to ensure safe passage for the injured to medical institutions with adequate facilities.

The court appointed lawyer Zubeda Begum as amicus curae (friend of the court) to coordinate between the victims and agencies providing medical assistance and safe passage to riot victims.  It directed that a helpline be set up for the victims and private ambulances be provided. It also directed the setting up of night shelters and community halls with basic facilities like blankets, medicine, food and sanitation for the victims.

The court grilled Mr Mehta, who was appearing for the Delhi police, over Mr Mishra’s video and a plea, filed late Tuesday night, seeking lodging of FIRs and arrests of those involved in the violence. The plea referred to the BJP leader’s video and held him responsible for inciting and orchestrating violence.

Asked if he and the Delhi police had seen the video in question, Mr Mehta claimed he did not watch television. A senior police officer in the courtroom said he had seen speeches by Union minister Anurag Thakur and BJP MP Parvesh Verma — both of whom have also repeatedly made hate-filled communal rants — but not that by Mr  Mishra.

Justice Muralidhar remarked: “I am really amazed at the state of affairs of the Delhi police” and asked the court staff to “play Kapil Mishra’s video clip in the courtroom”. The speeches by Mr Mishra, Mr Thakur, Mr Verma and several other BJP leaders — made during the campaign for the Delhi Assembly elections this month — have been severely criticised by the Opposition and civil society for appearing to encourage violence against those protesting against the amended citizenship law. Mr Thakur was caught on video urging people to “goli maaro” (gun down) traitors shortly before lone gunmen opened fire at the anti-CAA protesters in Delhi.