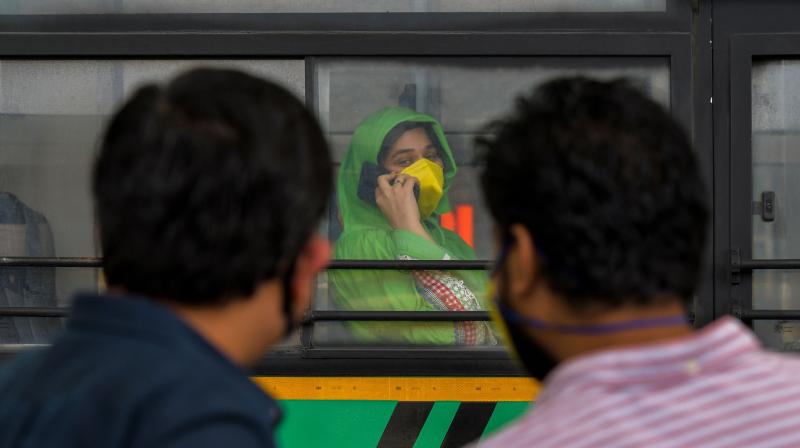 A woman (C) speaks on her phone on a bus before being taken to a quarantine facility after arriving from Mumbai. (AFP)

Mancherial: Workers returning from other states to their native villages in undivided Adilabad district to be with their families are being humiliated and stigmatised, especially if they are known to have come from Mumbai or Maharashtra, where the number of Covid cases is the highest in the country.

The villagers are scared that they will spread the virus, especially after some returning workers have been found to have contracted the disease.

All returning villagers are not being tested for Covid-19 but are just being told to stay in home quarantine. Those showing symptoms of the disease are being sent to government isolation centres.

The attitude of the villagers towards the returning workers is so inhuman that the latter say it would have been better if they had died in Mumbai and not undertaken the arduous journey to return to their homes.

The returning workers in Mancherial district are natives of Hajipur, Luxettipet, Jannaram and Dandepalli mandals and they belong to the fishing community and worked in the harbour in Mumbai.

Nineteen other suspected cases have been sent to a government isolation centre in Bellampalli and are awaiting the test results. They are family members and contacts of persons who tested positive for Covid-19.

A guest worker who returned to Rotiguda from Mumbai and was in home quarantine told this reporter: “I regret coming to my native village. It would have been much better staying back in Mumbai and dying there of corona instead of facing humiliation at the hands of my own villagers.”