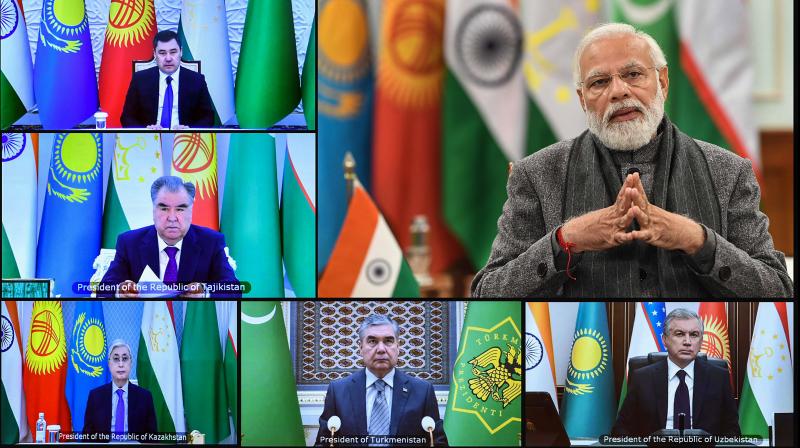 New Delhi: At the first ever India-Central Asia Summit held virtually on Thursday to take ties to “new heights”, Prime Minister Narendra Modi and the Presidents of Tajikistan, Uzbekistan, Kazakhstan, Kyrgyz Republic and Turkmenistan decided to strengthen trade links and connectivity through the Iranian port of Chabahar that is being developed by India and provides sea-land access to land-locked Central Asia and the International North-South Transport Corridor (INSTC).

With PM Modi saying that cooperation between India and Central Asia is essential for regional security, it was also decided to ramp up defence ties, institutionalise Indo-Central Asian ties through regular meetings, including a Summit every two years, and prepare a roadmap on trade and industrial cooperation that will include a “Round-Table on Energy and Connectivity”.

It was also agreed that Joint Working Groups (JWGs) will be formed on Chabahar for free movement of “goods and services between India and Central Asian countries” as well as one on regional security, including the situation in Afghanistan, at the senior officials’ level.

The leaders also condemned terrorism, including cross-border terror. Discussing the impact of the situation in Afghanistan on the security and stability of the region which had all of them “concerned”, India and the five Central Asian nations noted a broad consensus on Afghanistan which including “formation of a truly representative and inclusive government, combating terrorism and drug trafficking, central role of the UN, providing immediate humanitarian assistance for the people of Afghanistan and preserving the rights of women, children and other national ethnic groups and minorities”. They also agreed that Afghan territory “should not be used for sheltering, training, planning or financing terrorist acts”.

In a specific mention in his opening remarks, PM Modi said India was further strengthening its close security ties with Tajikistan that observers point out is the nation with whom India has the closest understanding on the situation in Afghanistan. It was also agreed at the Summit to consider holding joint counter-terrorism exercises between India and interested Central Asian countries.

At a time when China is also stepping up its economic engagement with these five nations, India is already providing a $1 billion Line of Credit (LoC) announced in 2020 for infrastructure development projects in the five Central Asian nations besides a $448 million LoC exclusively for Uzbekistan that was announced in 2018.

Describing Russia and Iran as “key stakeholders” in the connectivity projects between India and Central Asia, ministry of external affairs’ secretary (West) Reenat Sandhu on Thursday evening said that India was ready to build and plan connectivity projects with the region. The INSTC  is an important initiative taken by India, Russia and Iran to enhance connectivity with Central Asian countries and is the “shortest multimodal transportation route linking the Indian Ocean and Persian Gulf via Iran to Russia and North Europe”.

After PM Modi pushed for an “effective structure” for Indo-Central Asian cooperation and establishment of a framework of regular interactions at different levels and among various stakeholders, it was decided to hold the Summit every two years. Apart from the India-Central Asia Dialogue mechanism at foreign ministers level, the leaders further agreed that the ministers of trade and culture would also meet at regular intervals to take forward cooperation. It was also agreed that the regular meetings of secretaries of the security council to discuss security developments in the region would continue.

In his opening remarks, PM Modi said, “We all have the same concerns and objectives for regional security. We are all concerned about the developments in Afghanistan. In this context also, our mutual cooperation has become even more important for regional security and stability. Today's summit has three main objectives. First, to make it clear that cooperation between India and Central Asia is essential for regional security and prosperity. From the Indian point of view, I would like to emphasise that Central Asia is central to India’s vision of an integrated and stable extended neighbourhood. The second objective is to give an effective structure to our cooperation. This will establish a framework of regular interactions at different levels and among various stakeholders. And the third objective is to create an ambitious roadmap for our cooperation.”