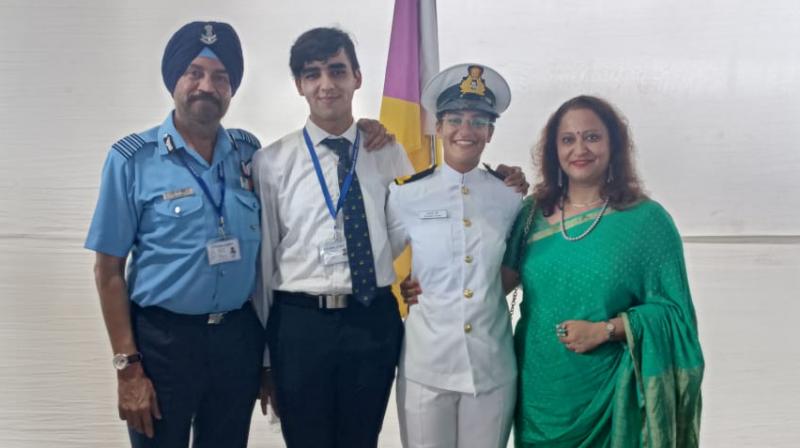 Sub Lieutenant Brahmjot Kaur of the Indian Navy with her family at INA, Ezhimala on Saturday. (Photo by arrangement)

Kolkata: A strong attraction to serve the Indian Navy inspired a young woman to become a third generation military officer from her family on Saturday. Meet Brahmjot Kaur who graduated alongwith other cadets in an impressive passing out parade at the Indian Naval Academy, Ezhimala in the morning as a Sub Lieutenant of the Naval Armament Inspectorate Cadre.

She comes from a family of officers of the Indian Armed Forces. Her grandfather, Wing Commander Swarn Singh Birdi, earlier retired as a technical officer from the Indian Air Force in 1992 while her father, Group Captain Simranpal Singh Birdi, who is currently serving in the IAF.

Brahmjot's family background from her maternal side is also connected to the defence. Her maternal grandfather, Lieutenant Colonel KS Cheema, retired from the Corps of Signals of the Indian Army in 1998 while her maternal uncle Lt Col Paramjeet Singh staked parental claim to join his father's unit in 1998 and is serving at present.

Brahmjot has always been keen to join the military service but the "attraction of the white uniform has been particularly strong," according to her family. She started preparation for her goal after passing out from SRM University in Chennai with an engineering degree in Electronics and Communication.

She was elated on hearing that her name figured in the list of merited candidates and joined the INA on December 26 last year. After undergoing a grueling training schedule  for around five months, Brahmjot will head to her next naval base to undergo further training.