PM's decision to demonetise cash in circulation was a move to help crony capitalists convert their black money into white. 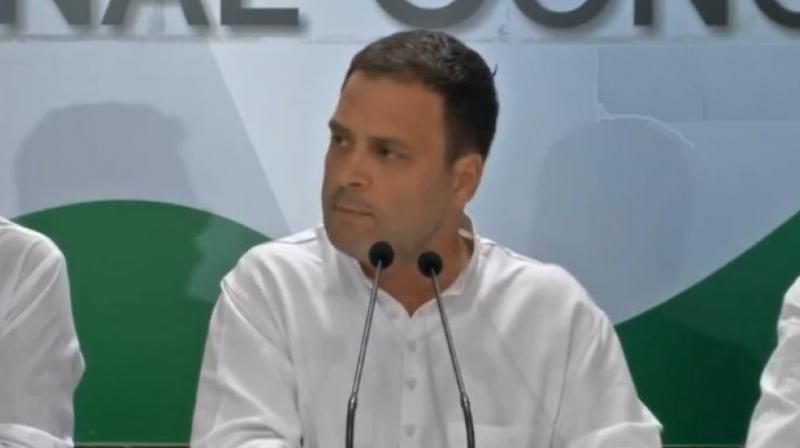 New Delhi: Congress president Rahul Gandhi on Thursday said that demonetisation announced by Prime Minister Narendra Modi on November 8, 2016 was not a mistake but an attack on citizens to help big businesses.

"Notebandi is nothing less than a huge scam," the Congress president ripped into PM Modi and his government at the Centre at a press conference a day after the Reserve Bank of India (RBI) said in its annual report that over 99 per cent of Rs 500 and Rs 1,000 notes banned by the Prime Minister in 2016 demonetisation have returned to the banking system.

"The RBI annual report proves that all his objectives failed. I want to state the real reason of demonetisation to everyone. PM Modi's 10-15 capitalist friends were defaulters. He helped them to turn their black money into white," the Congress president added.

Intensifying his attack on PM Modi and his government, Rahul Gandhi said: "This (demonetisation) can't be called a jumla, but it's a scam. PM Modi was right in saying that in 70 years what no other government couldn't do, his government did. Why did PM Modi snatch money from the poor and give it to his select group of 15 business?"

Speaking on the Rafale fighter jet deal, the Congress president said he had no problem if a Joint Parliamentary Committee (JPC) was formed so that all facts about the deal can be disclosed.

"On Rafale, I gave an option to Narendra Modiji through Arun Jaitleyji to have a JPC. He is writing long blogs these days. Did he ask Modiji about JPC? We don’t know," he said.