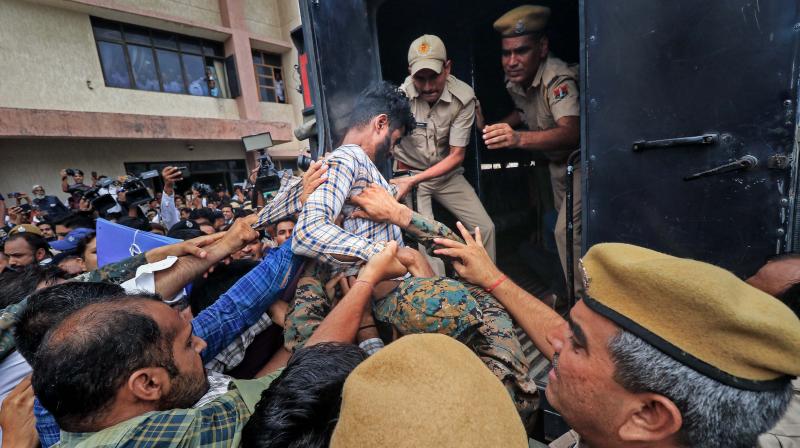 An accused in Kanhaiya Lal killing case being manhandled by the public as police take him away after he was produced at an NIA court, in Jaipur, Saturday, (PTI)

Mumbai: The National Investigation Agency (NIA) has taken over the probe into the June 21 killing of Amravati medical shop owner Umesh Kolhe over his alleged social media posts in support of suspended BJP leader Nupur Sharma. An NIA team visited the city in eastern Maharashtra on Saturday to probe into the killing of a chemist.

The Amravati incident is being equated with the killing of Kanhaiya Lal in Udaipur on June 28 by Ghaus Mohammad and Riyaz Jabbar for the former’s social media posts in support of Ms Sharma, who had made comments against Prophet Mohammed.

Mr Kolhe (54) was hacked to death on June 21. An FIR has been lodged at the City Kotwali police station. The incident took place when Mr Kolhe was returning home on a two-wheeler after closing his shop (Amit Medical Shop) while his son Saket (27) and wife Vaishnavi were accompanying him in a different vehicle.

The police confirmed that Mr Kolhe was killed because of his social media posts supporting Ms Sharma. According to the police, Mr Kolhe had allegedly shared a post on some WhatsApp groups in support of Ms Sharma for her comments. He even shared the post in a WhatsApp group in which some Muslims were also members, including his customers.

Mudassir and Shahrukh, who were seen in CCTV footage while conducting recce, were arrested on June 23. Abdul and Shoeb the next day, and Rashid on June 25.

The sixth accused in the case, Yusuf Khan Bahadur Khan (44), a veterinarian who runs a clinic in the city, was arrested on Friday night. According to the police, he instigated the murder by making a post on a WhatsApp group saying Mr Kolhe was circulating posts supporting Ms Sharma. This provoked the accused against Mr Kolhe and they decided to murder him, a police officer said.

Union home minister Amit Shah said that the government has handed over the case of Mr Kolhe to the NIA. "MHA has handed over the investigation of the case relating to the barbaric killing of Shri Umesh Kolhe in Amravati Maharashtra on June 21 to NIA. The conspiracy behind the killing, the involvement of organisations and international linkages would be thoroughly investigated (sic)," said the office of the home minister in a tweet.

Amravati MLA Ravi Rana said he and his wife, MP Navneet Rana, had informed the Union home ministry regarding this case and demanded a probe by the CBI and NIA. He also alleged that the previous MVA government wanted to suppress the case.