Mamata will not be able to stop CAA, claims Shah

He, however, described the road to success a “very tough battle” before directing party workers to get ready for a battle. 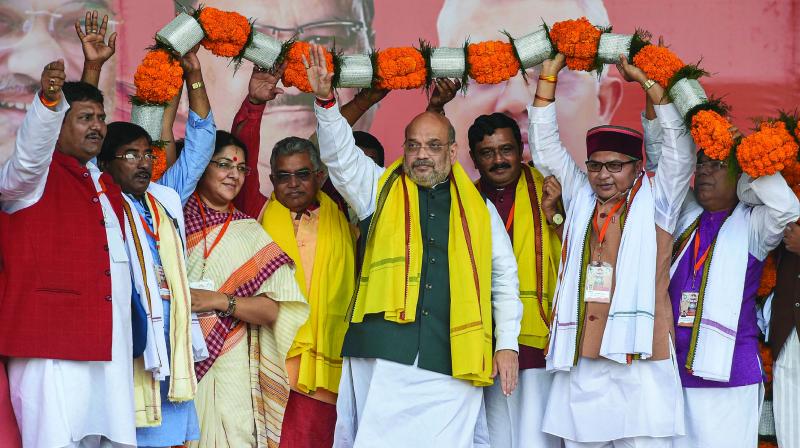 Union home minister Amit Shah being garlanded during a rally at Shaheed Minar Ground in Kolkata on Sunday. Soon after delivering his speech at a pro-CAA rally in Kolkata, Mr Shah went to the Kalighat Temple, which is only a few metres away from West Bengal chief minister Mamata Banerjee’s residence. (Photo: PTI)

Kolkata: Exuding confidence on the saffron surge, Union home minister Amit Shah on Sunday predicted that the BJP would come to power in West Bengal next year by dethroning the Trinamul Congress. He, however, described the road to success a “very tough battle” before directing party workers to get ready for a battle.

Ruling out the possibility of dynasty politics, Mr Shah also declared that no “Shehzada” but a “son of the soil” would become the next chief minister of the state. He tore into Trinamul Congress supremo and CM Mamata Banerjee after her tweet on “discrimination”, while claiming that her fierce movement against the Citizenship Amendment Act (CAA) would fail.

“PM Modi brought CAA that gave millions of refugees citizenship here in Bengal. Mamata Di opposed it. There were riots in Bengal. Trains and railway stations were burnt,” Mr Shah said, adding that Mamata won’t be able to stop the Centre from granting citizenship to refugees.

While speaking at the inauguration of NSG’s 29 Special Composite Group Complex, Mr Shah also cautioned those “planning to break and harm the country and destroy its peace” to fear the National Security Guard (NSG).

We want peace in the entire world. In our history of 10,000 years, India has never attacked anyone. We would not allow anyone to disrupt our peace. And anyone who
takes the lives of soldiers will have to pay dearly. People who want to divide the nation and disrupt its peace, they should fear the presence of NSG,” he said at the inaugural function.

Addressing the rally Mr Shah said, “Mamataji would now wait and watch how the BJP comes to power with a thumping majority in the next Assembly polls. In 2014, the BJP got 87 lakh votes here. But in 2019, we got 2.30 crore votes here resulting in 18 MPs with us. I am confident that the progression which started with 18 seats in the Lok Sabha polls and is continuing, is not going to stop.”

He told the BJP workers, “It will rest with a BJP government formation with two-third majority in the next Assembly polls. It is a very tough battle. You will have to fight it for Bengal’s development. The entire leadership, including me, will be in shoulder to shoulder with you for this. The thought of appointing a Rajkumar as a successor can not happen in Bengal.”

Pinning hope on the BJP’s victory in 2021, Mr Shah asserted that it would give citizenship to the refugees while ending a host of issues: injustice to the people, corruption, syndicate nexus, extortion, deterioration in law and order situation, industrialisation and infiltration under the Trinamul’s rule of a decade.

His blistering attack on the Trinamul chief was significant as Ms Banerjee, in an oblique reference to the CAA, tweeted in the morning, “Today on @UN #ZeroDiscriminationDay, it pains me to witness the politics of discrimination being woven into the fabric of India. Let us pledge to uproot all forms of division based on caste, creed, and religion from our society. We will never stand for discrimination of any kind.”