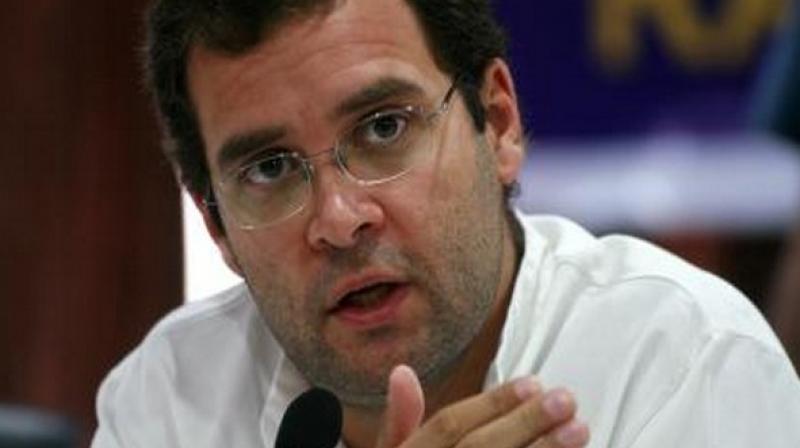 The Congress Party on Saturday staged protests across the nation over attack on party vice president Rahul Gandhi's convoy in Gujarat on Friday. (Photo: Twitter | ANI)

New Delhi: The Congress Party on Saturday said that the attack on party vice president Rahul Gandhi was a murderous attack by the Bharatiya Janata Party (BJP) and the Rashtriya Swayamsewak Sangh (RSS) and both the parties believes in violence, intimidation and physical assaults on political opponents or leaders.

Senior leader Ghulam Nabi Azad told the media during the press conference, "I termed such attempt as a murderous attack by BJP and RSS on Congress vice president Rahul Gandhi. The Central Government and the state government are answerable to this. They are responsible for Rahul Gandhi's security in upcoming election campaigning. Rahul Gandhi was under SPG protectee when he was attack by boulder."

Meanwhile, another grand old party senior leader Anand Sharma said that such attacks not only deserve serious condemnation but also expose intent, ideology and characteristic of the BJP and the RSS.

"Whatever happened is unacceptable in Indian democracy. Not only it deserve serious condemnation but also the exposure of the intent, ideology, characteristic of the BJP and the RSS which believes in violence, intimidation and physical assaults on political opponents or leaders. We will fight against the BJP and the RSS agenda," Sharma said.

The Congress Party on Saturday staged protests across the nation over attack on party vice president Rahul Gandhi's convoy in Gujarat on Friday.

Rahul's car was attacked on Friday when he was on his way to the helipad after visiting the flood-hit areas in Gujarat.

Earlier in the day, Rahul cornered Prime Minister Modi and said it was BJP and Rashtriya Swayamsevak Sangh (RSS) way of politics.

"In yesterday's incident, BJP workers threw a stone at me which hit my personal security officer (PSO). This is Prime Minister Modi and BJP- RSS 's way of politics. What can I say?" Rahul told media.

Indirectly referring to Prime Minister, Rahul said, "Why the one, who has done this, would condemn the incident?"

Following the attack, Rahul took to Twitter and wrote, "Narendra Modi ji's slogans, black flags and stones will not stop us.... We will put in all our might into the service of people."

Condemning the incident, Gujarat Chief Minister Vijay Rupani said that a senior officer has been appointed to investigate into the incident and assured that a strict action will be taken against the guilty.