Andhra government likely to give priority to 'Navaratnas' in budget

'Navaratnas', is the nine major flagship programs assured by YSRCP during the election campaign. 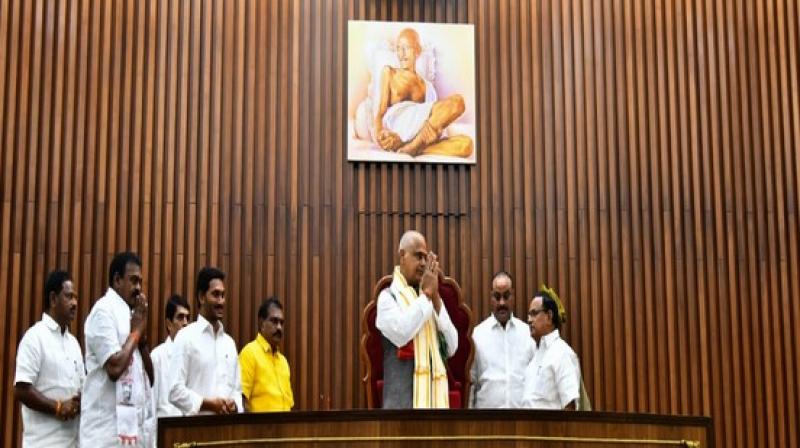 This is the first major assembly session after YSRCP government came to power. (Photo: ANI)

It should be noted that this is the first major assembly session after YSRCP government came to power.

This year, it is expected that the budget will be going to give top priority to 'Navaratnas', the nine major flagship programs assured by YSRCP during the election campaign.

In the first meeting, the speaker met Chief Secretary L V Subrahmanyam and secretaries of all departments. He advised the officials to make requisite arrangements for smooth conduct of the assembly session.

"There are 70 first time MLAs in the house. Let us work for conducting the assembly session with a realistic approach. We will provide equal opportunities to all members of the house. During assembly sessions in the tenure of the previous government, some subjects are not taken for discussion deliberately. Now the situation will be different," the Andhra Pradesh Assembly speaker said.

"The session will be conducted in a manner that people will think that the session has fruitful discussions. Officials should be ready with answers for the questions by the members. Do not prepare the bills in hurry, the aims of government bills should be understood and then only the drafts should be placed before the house," he added.

He also held a review meeting with higher rank officials of the police department pertaining to safety and security. A command control room will be set up outside the premises of Assembly building for coordinating of security measures.

Meanwhile, Chief Secretary L V Subrahmanyam handed over the responsibility to coordinate all departments on all draft bills and questions, to GAD secretary R P Sisodia. He opined that ten to twelve bills are likely to be introduced in the assembly during this budget session.