Of the 70 Assembly seats, the BJP bagged eight, a gain of merely five seats from the last Assembly polls in 2015. 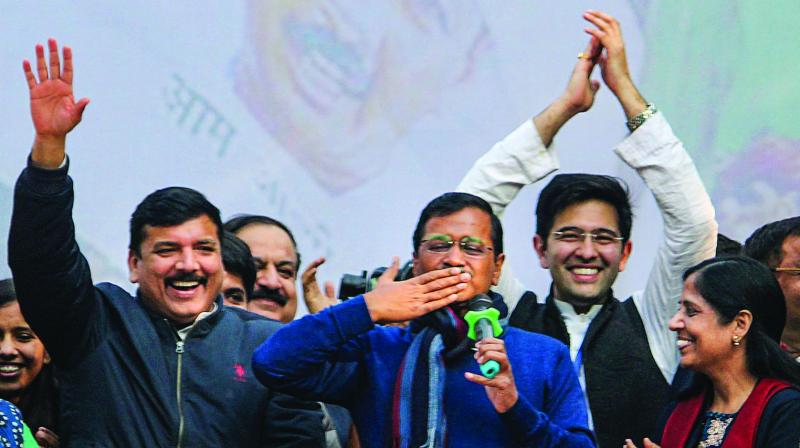 Delhi CM and AAP convenor Arvind Kejriwal gives a flying kiss to Delhi voters during his address to supporters after party’s victory in the state Assembly polls at AAP office in New Delhi on Tuesday. (Photo: PTI)

NEW DELHI: Delhi’s vote is a statement against hate.

The Bharatiya Janata Party, which tried to legitimise hate speech and pressed on with its attempts to divide Hindus and Muslims, was swept away on Wednesday by the Aam Aadmi Party’s avalanche.

Of the 70 Assembly seats, the BJP bagged eight, a gain of merely five seats from the last Assembly polls in 2015.

Riding high on the education, health and conventional “bijli, sadak, paani” agenda, the AAP returned to power in style for the third time with 62 seats, a loss of only five seats.

As for the Congress, its pathetic plight continued in the national capital as it yet again failed to open its account. So terrible was its rout that 67 of its candidates (including four allies) lost their deposits. (A candidate must poll at least one-sixth of the total votes polled to reclaim their Rs 10,000 deposit.)

Though the Congress’ failure to score and getting only 4 per cent of the vote share helped AAP sweep, the Grand Old Party’s repeated electoral routs puts a big question mark on the Gandhi clans’ leadership, which shows no inclination to loosen its grip.

For the BJP, this election was all about demonising the anti-Citizenship (Amendment) Act protests, especially at Delhi’s Shaheen Bagh and Jamia Millia Islamia, and its high-decibel campaign was focused on attacking the Muslim community and equating its rivals with terrorists.

To peddle its militant jingoism and anti-minority rhetoric, the BJP unleashed an army of Union ministers, chief ministers, MPs and the entire RSS machinery, turning the election into a fight between India and Pakistan. Frenzied rants of “Goli maro ga****ro ko”  dominated the BJP campaign, drawing mild punitive action from the Election Commission of India.

UP chief minister Adityanath, the face of hardline Hindutva, who campaigned in Delhi’s 15 constituencies, asked voters to install a BJP government in Delhi which would promote all religions, but added that where “boli (words) doesn’t work, goli (bullet) does.”

In an outlandish claim, Mr Adityanath went on to describe biryani as the food of anti-nationals.

With economic slow down, rapidly rising inflation and unemployment, the BJP has time and again fallen back on the politics of majoritarianism and polarising voters ahead of polls on religious lines.

Perhaps for the first time, Delhi witnessed such an ugly campaign replete with hate and brazen attempts to turn one community against the other.

The BJP unleashed its bigwigs in a way it hasn’t before.

Prime Minister Modi addressed two big rallies as part of the BJP blitzkrieg of 6,577 poll events in the run-up to Delhi elections, including rallies, roadshows and meetings.

As his opponents spewed venom, AAP boss and Delhi chief minister Arvind Kejriwal deftly blended development with soft Hindutva and crossed the finishing line, leaving the BJP far behind and gasping for breath.

Beating the BJP at its game, he recited the Hanuman Chalisa on a TV show, tweeted a video showing him as a “Hanuman bhakt” and promised a curriculum of “desh bhakti” in the party manifesto. He kept away from Shaheen Bagh, making it difficult for the BJP to link him with the anti CAA-NRC protests. A frustrated BJP continued to accuse him of supplying biryani to protestors and I&B minister, Prakash Javadekar, virtually called him a terrorist.

Mr Kejriwal did not go out of his way to woo the Muslims. He knew Muslims have no alternative but to vote for him. And they moved en masse towards him.

While earlier the saffron hawks found making Shaheen Bagh and spewing venom against the minorities a masterstroke, after the complete rout in Delhi, leaders have begun questioning the “masters” behind closed doors. A BJP leader felt that the top leadership “failed to judge the cosmopolitan nature of Delhi and tried to sell hate.”

Some felt the BJP’s move to bank on Mr Modi and the failure to come up with a CM face also contributed in its rout. In fact, the BJP remained divided over the CM face. While some pushed for Manoj Tiwari, others wanted Dr Harsh Vardhan.

The results could now have an impact on forthcoming polls in Bihar and Bengal.

Referring to the AAP’s thumping victory in the Assembly elections, party leader Gopal Rai asked volunteers to get ready, saying, “What can happen in Delhi can expand to the whole country”.

Mr Rai, who was a minister in the previous Arvind Kejriwal-led government, retained Babarpur constituency by defeating BJP’s Naresh Gaur. “The whole country needs change. I urge my volunteers to prepare themselves. Get ready. What can happen in Delhi can expand to the whole country,” he said.