The situation is similar in neighbouring Jamah where Sita Soren, Sibu Soren’s daughter-in-law is taking on the BJP’s Suresh Murmu. 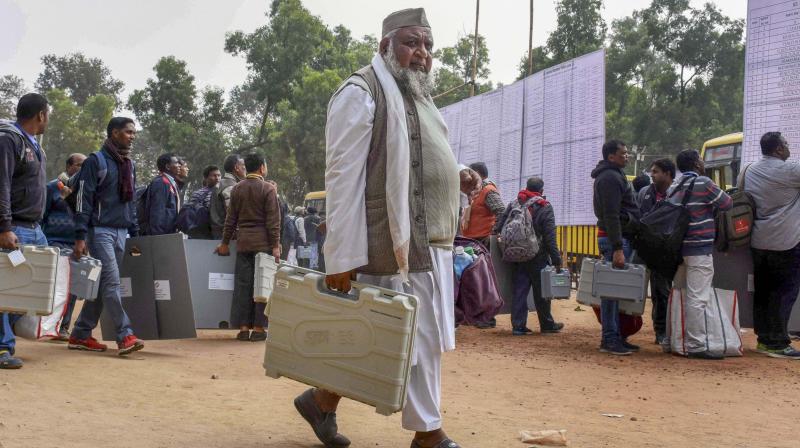 Polling officials carry EVM machines and other material on the eve of the third phase of Jharkhand Assembly elections in Ranchi on Wednesday. (Photo: PTI )

Dhanbad: Midway through the Jharkhand Assembly polls, it has become clear that no one party is going to sweep the seats in what has become a bare-knuckled fight between parties, with regional outfits holding key to the final outcome.

The ruling BJP is facing a challenge on one side from the Jharkhand Mukti Morcha (JMM), led by former CM Hemant Soren and on the other side from its erstwhile ally, the All Jharkhand Students Union (AJSU), led by Sudesh Mahato. In the absence of a clear-cut bipolar contest, the fight has gravitated to each constituency and each candidate. In the tribal areas, as one travels from Dumka to Dhanbad, there is a direct contest between the BJP and JMM with advantage JMM all the way.

Even in Dumka, where Mr Soren lost in 2014, the new BJP candidate Louis Marandi faces an uphill task. The situation is similar in neighbouring Jamah where Sita Soren, Sibu Soren’s daughter-in-law is taking on the BJP’s Suresh Murmu.

In Mr Murmu’s own words, “In tribal areas like these, national issues like the Ram temple do not matter. Here it is localised and basically, a fight for tribal votes.”

A similar scenario prevails in other neighbouring constituencies of Nallah and Jamtara. However, in urban and semi-urban areas like Dhanbad and Jharia, the BJP still holds sway.

A visit to the BJP office in Jharia, which is clearly one of the best buildings in this decaying township, shows that workers are still gung-ho about the Ram temple and candidates are trying to encash the Modi magic which continues to work wonders. Vinay Kumar Singh, BJP election committee head for Jharia, says, “It is the Modi factor all the way. The good work done by him will see the party through.”

Prime Minister Narendra Modi will hold a rally in the area on December 12. Six Assembly constituencies of Dhanbad are going to polls on December 16. In fact, the way the ruling party is using the Modi crutch to navigate the polls shows the latent anger against chief minister Raghubar Das. Most of the voters this reporter spoke to stated that their vote against the BJP was essentially a vote against Mr Das and not against the central leadership (read: Mr Modi).

Naresh Bhagat of the AJSU, election in-charge of the party in the Chandankiyari constituency, says, “This time, it is more of a Raghubar Hatao campaign.”

Mr Das has single-handedly alienated the people of the state, especially the youth, by making 1986 the cut-off for reservation in governnent jobs, said Mr Bhagat.