Says only Congress can take on BJP, door kept open to alliances with regional parties 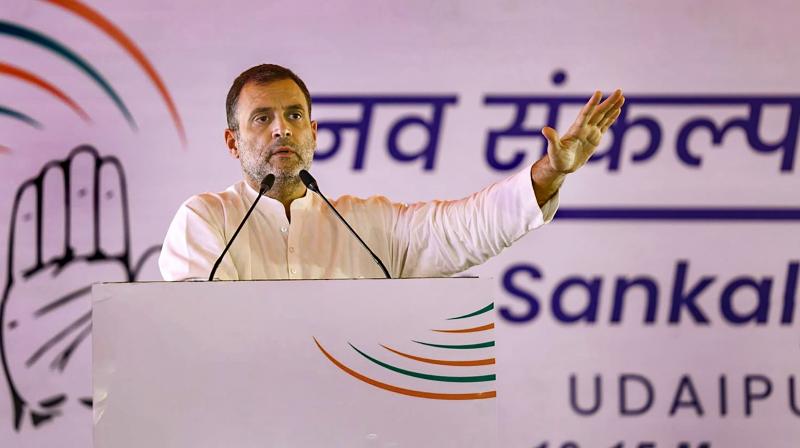 New Delhi: Congress leader Rahul Gandhi on Friday asked his partymen to reconnect with people on the ground. He asked cadres to go to the people and reestablish the "lost connect with them". He asserted that the fight is not against just one party but has elevated to a battle against ideology, adding that the regional parties lack the ideological clarity to fight against the challenges thrown at them by BJP-RSS.

Mr Gandhi, emphasising that the party needs to reconnect with the people, said, “We have to revive our connection with the people and need to accept that it has broken down. We will strengthen it; this will not happen with any short-cut, it requires hard work. The Congress will take out a nationwide yatra in October to strengthen connections with people."

Addressing the delegates on the last day of the three-day ‘Chintan Shivir’ – the brainstorming retreat of the Congress in Udaipur, Mr Gandhi said, “There are big powers against us. We are not only fighting against a political party but against all institutions and the biggest crony capitalists of India. But don’t be nervous. I am there with you. I have never taken a single rupee from corruption. I have not taken a single rupee from Bharat Mata. The BJP doesn’t talk about regional parties. BJP knows that regional parties have their own space but they can’t defeat BJP due to the lack of ideology. Only Congress can take on the BJP. This is a battle for India’s future."

Accepting that the Congress lacks in communication Mr Gandhi said, “Not the ideology or thinking but the way we do our work must change. The 21st century is about communications and if there is one area where opponents outdo us, it is communications. They have more money and are better at this. But we have to connect to people, youths."

Interestingly, in his address Mr Gandhi, though declared that the Congress will follow the approach of dominance of the party in the entire country, the political resolution in the session left the door open for alliances with regional parties if the need arises.

Mr Gandhi launched a scathing attack at the centre and alleged that there is a fear that the demographic dividend will turn into a demographic disaster and that the BJP government is responsible for it. He said that the voices are being muzzled by the government and added, “We see it in Parliament house. Our mics are shut off, members are thrown out of the house, conversations are not allowed. We see it when the judiciary is pressurised. We see it, when the arms of the election commissioner are twisted. We see it, when the media is muzzled and we say- okay. We lightly say that the conversation is being muzzled, but what we do not understand is the consequence of this muzzling.”

He further added that India is facing a breakdown of institutions. Price rises and unemployment are rampant. He said, “BJP has systematically destroyed instruments that allow conversations between people. Our country is in serious trouble.”