It is speculated that the BJP will give her a ticket to contest the coming Assembly polls, but this has not been announced so far 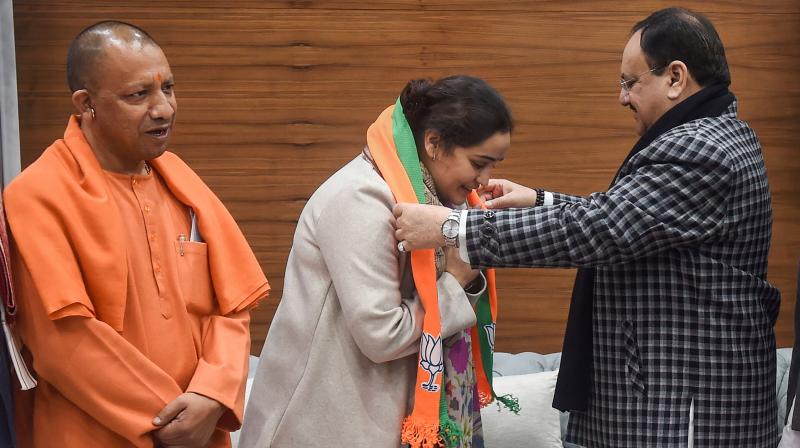 New Delhi: Samajwadi Party patriarch Mulayam Singh Yadav’s daughter-in-law Aparna Bisht Yadav, sister-in-law of party chief Akhilesh Yadav, on Wednesday joined the BJP ahead of the Assembly elections in Uttar Pradesh, virtually confirming the speculation about a rift within the Yadav clan. It is learnt that the SP president was not in favour of his sister-in-law contesting the polls.

Aparna Yadav is the wife of Mulayam’s younger son Prateek, who going by rumours in the Yadav-dominated party does not have a cordial relationship with his step-brother Akhilesh Yadav. It is speculated that the BJP will give her a ticket to contest the coming Assembly polls, but this has not been announced so far.

With the Yadav clan’s “chhoti bahu” entering the BJP, pressure seems to have mounted on the SP president to contest the Assembly polls this time. Akhilesh Yadav is currently a member of the Lok Sabha from Azamgarh in UP.

The SP chief is already under pressure to contest the Assembly polls after Uttar Pradesh chief minister Yogi Adityanath’s Assembly poll debut from Gorakhpur Urban. Mr Yadav has hinted that he could contest from one of the Assembly constituencies in the Azamgarh region, a SP stronghold.

As she formally joined the BJP on Wednesday, Ms Aparna Yadav said: “I have always been profoundly impressed by Prime Minister Narendra Modi and UP CM Yogi Adityanath… I have always said that for me it is always the nation first. I have joined the BJP so that I can serve my nation. I have always been impressed by the schemes of the BJP and will do my best in the party.” Earlier, her being photographed together with Yogi Adityanath on several occasions had created a flutter in state politics.

While the BJP, which had recently lost several prominent OBC faces to the SP, scored a major point with a Yadav family bahu snubbing the SP, from which she had made an unsuccessful electoral debut in the last election, Wednesday’s development could also create some problems for it. Ms Yadav had contested against the BJP’s Rita Bahuguna Joshi in 2017 from the Lucknow Cantt Assembly seat, which she is now seeking for her son. Ms Rita Bahuguna Joshi had to vacate her seat after her entry into the Lok Sabha from Allahabad in 2019.

She has been meeting the BJP central leadership with her request and has even said that if her son gets a ticket, she will quit her Parliament seat. The BJP is yet to announce who will contest from that seat.

Responding to his sister-in-law joining the saffron fold, the SP chief said: “I want to congratulate her and I am happy that the SP’s ideology is now spreading… I am sure our ideology will reach there and spread democracy.”

Akhilesh Yadav said his father Mulayam Singh Yadav had tried to “counsel her” not to leave the SP. According to the buzz in the SP, its chief was unwilling to field any family member in the coming Assembly polls, which had upset Ms Yadav.

When asked whether or not he will contest, Mr Yadav said: “If I contest, it will be after taking permission from the people of Azamgarh, who have elected me as MP.”

Ms Yadav joined the BJP at the party headquarters in New Delhi in the presence of UP deputy chief minister Keshav Prasad Maurya and state unit chief Swatantra Dev Singh. Mr Maurya took the opportunity to hurl a jibe at the SP chief, saying he has not been successful in his family and was also unsuccessful as a chief minister and an MP.

Union minister Anurag Thakur also welcomed Ms Aparna Yadav into the BJP, saying that it indicated that women in UP were safe living under the Yogi Adityanath-led BJP government in the state.

Former Uttarakhand CM and senior leader Trivendra Singh Rawat has in a letter to party president J.P. Nadda requested that he not be selected to contest the coming Assembly polls in the state. Speculation was rife in the Uttarakhand BJP unit that it would be tough for the party to retain the Doiwala Assembly seat if Trivendra Rawat was renominated. If at all he were to contest, sources said, it should be from a different seat.