According to the notification, the process for filing nominations for the election will be held from September 24 to 30 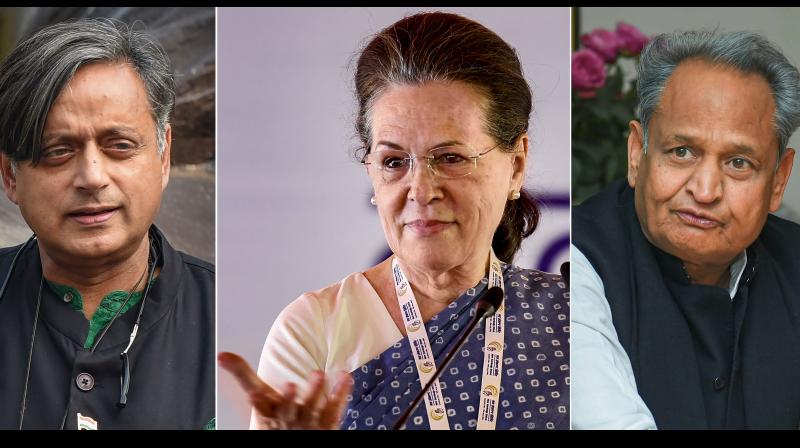 File photos of Shashi Tharoor, Sonia Gandhi and Ashok Gehlot. After more than two decades, the Congress is likely to see a non-Gandhi contest for the post of its chief, with Shashi Tharoor and Rajasthan Chief Minister Ashok Gehlot likely to run for the AICC presidential poll. (PTI Photo)

New Delhi: The Congress' central election authority on Thursday issued a notification for the AICC president polls, setting the ball rolling for electing the successor to the longest-serving party chief Sonia Gandhi.

In the notification issued, Chairman of the Central Election Authority Madhusudan Mistry, under the power vested in him by provision of Article XVIII of the Constitution of the Indian National Congress, announced the election of the president of the party to be held as per the given schedule.

According to the notification, the process for filing nominations for the election will be held from September 24 to 30.

The date of scrutiny of the nomination papers would be on October 1, while the last date of withdrawal of nominations would be October 8.

The election, if there is more than one candidate, will take place on October 17. The counting of votes and the declaration of results would be on October 19.

"Now therefore, I hereby call upon the delegates of the Congress Party to elect the President of Indian National Congress in accordance with the provision made under Article XVIII," Mistry said in the notification.

The nomination form will be available at the AICC Office, 24 Akbar Road, New Delhi, according to the notification.

The race for the Congress president's post hotted up on Wednesday with Rajasthan Chief Minister Ashok Gehlot giving a clear indication that he could enter the poll fray and Shashi Tharoor meeting the party's poll panel chief to enquire about the nomination formalities.

After over two decades, the Congress is set to see a contest for the post of party chief.

The upcoming polls would certainly be historic as the new president would replace Sonia Gandhi, the longest-serving party president who has been at the helm since 1998, barring the two years between 2017 and 2019 when Rahul Gandhi took over.

The party last saw a contest for the post in November 2000. Jitendra Prasada had lost to Sonia Gandhi in 2000 and prior to that Sitaram Kesri had defeated Sharad Pawar and Rajesh Pilot in 1997.