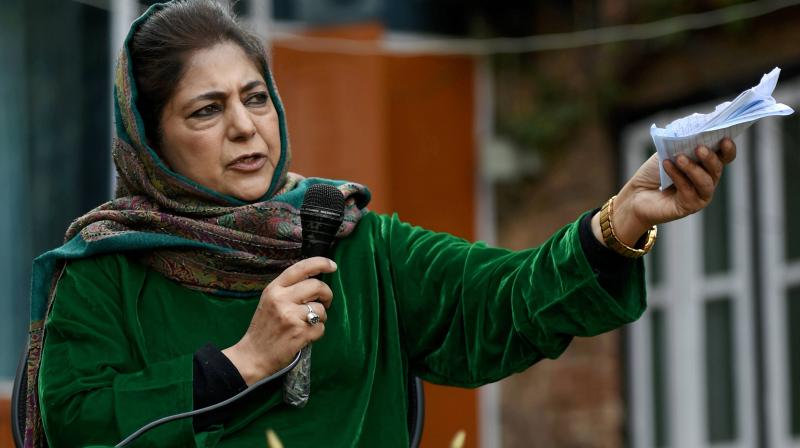 Jammu and Kashmir former chief minister and Peoples Democratic Party (PDP) President Mehbooba Mufti addresses her first press conference after her release from over 14 months long detention, in Srinagar, Friday, Oct. 23, 2020. Mufti was in detention from August 5 last year following the abrogation of the special status of Jammu and Kashmir. (PTI)

Srinagar: Renewing her pledge to fight for the restoration of Jammu and Kashmir’s special status till her last breath, former chief minister and People’s Democratic Party (PDP) president, Mehbooba Mufti, said on Thursday that the Centre had no right or power to abrogate Article 370. She regretted posing her faith in Prime Minister, Narendra Modi, and even allying with the BJP.

She also said that the bigger issue before her, the PDP and the people of J&K was to seek the resolution of the Kashmir issue.  “Our fight is not confined for the restoration of Article 370, but for the resolution of Kashmir issue as well. Kashmir is an issue and nobody can turn a eye blind to it,” she said while addressing a press conference here, her first after her release from a 14-month long detention earlier this month.

61-year-old Mufti, who looked in a defiant mood, said, “Those who think we will forget Article 370 are living in fool’s paradise. People have given a lot of sacrifices and we won’t allow those sacrifices to go waste.” She added, “We (the leaders of various political parties who are part of the recently formed People’s Alliance for Gupkar Declaration) are united and people should also fight it in unison. It is not the fight of Dr Farooq, Sajad Lone or any other leader but of one and all.” She vowed that she will be the first person among the political leaders to give her blood “for this cause in case the need arises”.

Accusing the BJP government at the Centre of hurting the sentiments of the people of J&K by snatching from them the special status and taking other “anti-people” decisions, she said. “This is highly regrettable and condemnable too that since the unconstitutional and illegal abrogation of Article 370, the government has left no stone unturned to hurt the sentiments of people by taking all the anti-people decisions. They don’t want people of Jammu and Kashmir. People of JK are expendable for them.”

She asserted, “The people of J&K are shell shocked. They have lost hope. August 5 was loot and theft”. Reiterating that the Centre had no powers to abrogate Article 370, she said. “It was done illegally and not through legal means. They have had no powers to take it away. Whatever is stolen from us, will be returned to us. We stand by our agenda.”

Asked about the PDP’s joining hands with the BJP to cobble up a government in J&K way back in 2015, she said that she regretted posing faith in Prime Minister Modi who belonged to a party of which Atal Bihari Vajpayee was also a part.

She also asserted that it was not the PDP’s alliance with the BJP that led to the abrogation of Article 370. “It was the Parliament that was misused. Parliament had no right to do this,” she said.

She also said that India is economically and at diplomatic level in distress and internally also polarization is taking its toll due to wrong policies and actions of the present government. She said, “Our economy is worse than Bangladesh. They have demonised Muslims, Dalits all downtrodden communities. Kashmir is a problem. You can’t close your eyes to it. PDP always wanted to bring peace to this place. Look at the condition now; China on one side, Pakistan on the other.”

On proposed elections in J&K, she said, “Mehbooba has nothing to do with the elections.” She, however, hastened to add that party leaders will sit together and the signatories of People’s Alliance will also sit and take any decision accordingly.