J.P. Nadda, who announced the seat sharing formula along with Capt. Singh and Mr Dhindsa, claimed that the state needs special attention 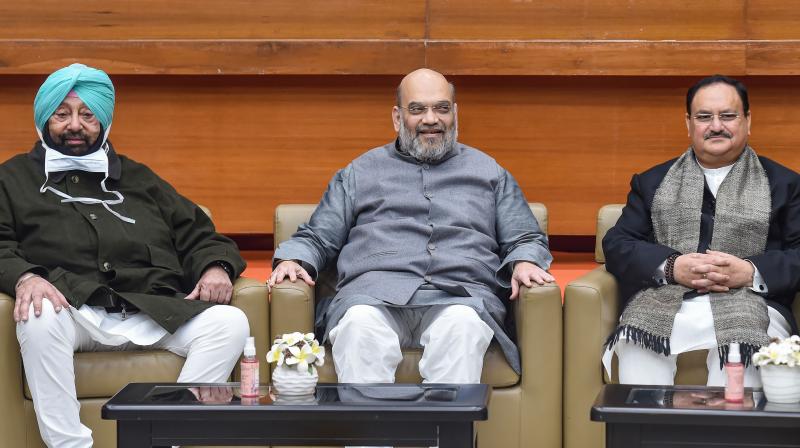 New Delhi: Asserting that security issue in the border state of Punjab is the main priority of the BJP and its allies — former chief minister Captain Amrinder Singh’s Punjab Lok Congress (PLC) and former Shiromani Akali Dal (SAD) leader Sukhdev Singh Dhindsa’s SAD (Sanyukt) — the three alliance partners on Monday announced their seat-sharing formula for the upcoming Assembly polls in the state. The BJP will contest on 65 Assembly seats, the PLC on 37 seats and the SAD (Sanyukt) will contest on 17 Assembly seats.

BJP president J.P. Nadda, who announced the seat sharing formula along with Capt. Singh and Mr Dhindsa during a press conference at the BJP headquarters, claimed that the state needs special attention, needs a “double engine government” and better coordination between the Centre and the state. Capt. Singh said that the three parties joined hands for the sake of national security and welfare of the state, while holding neighbouring country Pakistan for trying to create unrest in Punjab by smuggling drugs and arms and ammunition in the state.

Noting how Prime Minister Narendra Modi has a special affection for Punjab, Mr Nadda also pointed out the steps taken by the Modi government for Punjab and Sikhs, including the recent decision to observe December 26 as “Veer Bal Diwas,” dedicating the day to the martyrdom of tenth guru Guru Gobind Singh’s sons. Mr Nadda also said that Punjab is a border state and security is a very important issue as far as Assembly elections are concerned.

“After I dropped Navjot Sidhu from my government, I got a message from Pakistan that he is an old friend of their prime minister and he would be grateful if you can keep him in the government. If he (Sidhu) doesn’t work, then you can remove him,” said Capt. Singh also attacked the PCC over the “sand mafia” in the state.