Congress had named Mr Singh, who was the party’s incharge of Jharkhand, as one of the star campaigners for the coming Assembly polls 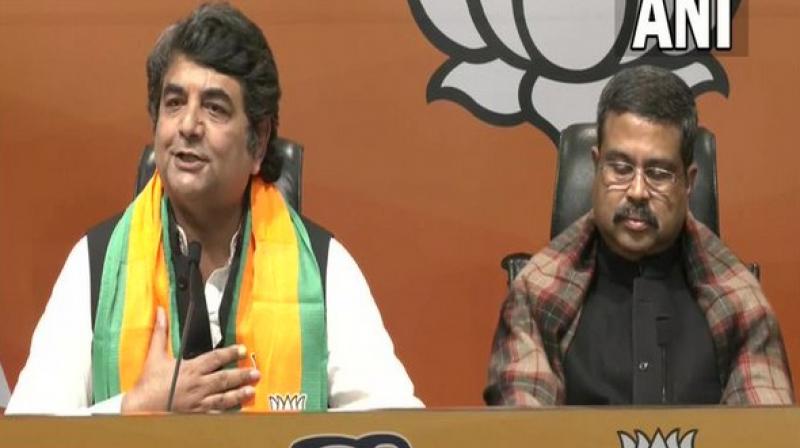 New Delhi: In another major blow to the Congress, which is trying to revive its organisational base in the politically crucial state of Uttar Pradesh, yet another prominent member of its youth brigade and a “Gandhi loyalist”, former Union minister R.P.N. Singh, joined the BJP on Tuesday ahead of the upcoming Assembly polls. Mr Singh, who was considered close to Congress leader Rahul Gandhi, termed his quitting the Congress and joining the saffron fold as a “new beginning” and claimed the Congress, with which he was associated for 32 years, has “not remained the same as it was before”.

However, his former party labelled him as a “coward” while maintaining that the battle against the BJP can only be fought with “courage and bravery.” The Congress had on Monday named Mr Singh, who was the party’s incharge of Jharkhand, as one of the star campaigners for the coming Assembly polls, including his home state UP. Congress general secretary Priyanka Gandhi Vadra is incharge of UP.

To welcome him in the BJP, along with the party’s leaders, including union ministers Dharmendra Pradhan and Anurag Thakur and UP deputy chief ministers (Keshav Prasad Maurya and Dinesh Sharma), former member of the Congress’ youth brigade and now a Union minister in Prime Minister Narendra Modi's government, Jyotiraditya Scindia, was also present at the party headquarters. Mr Scindia had joined the BJP last year, followed by another former member of the Congress' youth brigade, Jitin Prasada.

“I spent 32 years in one political party (Congress). But that party has not remained the same as it was before. I will work as a ‘karyakarta’ towards fulfilling PM Modi's dreams for India,” Mr Singh said after joining the BJP.
Mr Singh, who belongs to the OBC Kurmi caste, said he looked forward to his “contribution to nation building under the visionary leadership and  guidance” of PM Modi, BJP president J.P. Nadda and Union home minister Amit Shah.

“This is a new beginning for me and I look forward to my contribution to nation building under the visionary leadership & guidance of the Honourable Prime Minister Shri @narendramodi, BJP president Shri @JPNadda ji & Honourable Home Minister @AmitShah ji,” Mr Singh tweeted before joining the BJP.

He also uploaded his resignation letter to the Congress on his social media handle with the tweet: “Today, at a time, we are celebrating the formation of our great Republic, I begin a new chapter in my political journey. Jai Hind.”

Welcoming the former Congress leaders into the BJP fold, the party’s incharge of UP and Union minister Dharmendra Pradhan said that he had been personally pursuing Mr Singh to switch to the party.

“Since 2004, I was after (Jyotiraditya) Scindia, and told him that he’s the right person in the wrong place. When I met Mr Singh, who was then a minister... I told him that he should be with Narendra Modi and take the country forward. I thank both of them for joining the party as this is a good sign,” Mr Pradhan said.

Speculation is rife that Mr Singh could be fielded by the BJP from Padrauna Assembly seat against SP’s Swami Prasad Maurya, who had quit the BJP recently. Mr Maurya had defeated Mr Singh from the same constituency in the last election.

Reacting to Mr Singh quitting the Congress and joining the BJP,  Congress spokesperson Supriya Shrinate said, “This battle (against the BJP) can only be fought with courage and bravery and Priyanka Gandhi ji has said that a coward can’t fight it... Only a coward can jump to a party with a completely opposite ideology.”