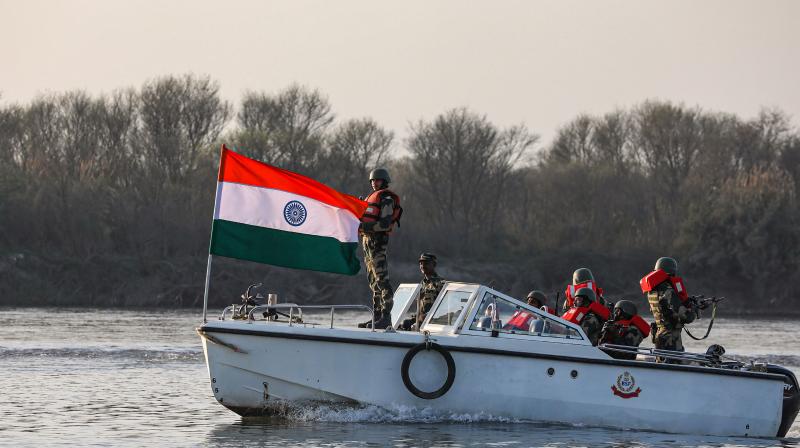 Jammu and Kashmir have heaved a sigh of relief over India and Pakistan agreeing to strictly observe all agreements on ceasefire along the Line of Control (LoC) and other sectors. (Photo: PTI)

SRINAGAR: Tired of unending military tensions and frequent bouts of skirmishes between the facing troops, the border residents of Jammu and Kashmir have heaved a sigh of relief over India and Pakistan agreeing to strictly observe all agreements on ceasefire along the Line of Control (LoC) and other sectors.

“It has come as a great relief to us. We hope and pray that both sides will really ensure strict observance of all agreements, understandings and cease firing along the LoC,” said Irshad Ahmad Khawaja, a resident of Uri while speaking to this newspaper over the phone.

He said that the border residents were happy. Echoing their and his own sentiment, he said, “If the two countries’ armies follow the promise we won’t suffer any further human and property losses. Kam se kam chen ki sans ley payen gay (At least, we will breathe in peace).”

However, Bashir Ahmad Dar, who lives at Balkote, a hamlet at a stone’s throw from the LoC, said he would keep his fingers crossed. Dar who lost his wife Farooqa Begum, 35, in cross-LoC shelling in November last year said, “I feel lost since I have lost my spouse. Had the two sides abided by the ceasefire agreement they had reached in 2003 my world would not have been ruined”.

Though the two countries pushed on with the ceasefire agreement signed after months of tortuous negotiations in 2003, the facing armies and border guards have often clashed both along the LoC and International Border (IB), the 198-km stretch of the 2,912-km India-Pakistan border from Gujarat to J&K called ‘Working Boundary’ by Islamabad as it passes through a “disputed region” particularly. Both sides suffered hugely in interminable hostility particularly after 2010 but it has been mainly the civilian populations on both sides which bore the brunt in cross border firing and shelling over the years. There had been strong craving for bringing this to a close.

Apart from the border residents, the fresh pledge of the two sides to revert to the November 2003 ceasefire agreement and hold to it has been welcomed by J&K’s political parties across the board. Former chief minister and National Conference president, Farooq Abdullah, said that the measure will go a long way towards sustainable peace between the two neighbouring countries.

“The agreement between the DGsMO of India and Pakistan will go a long way in ushering long-lasting peace alongside LoC and IB. NC has always been a strong votary of Indo-Pak peace. It is the people of J&K who have been facing the brunt of escalating tensions alongside the borders. I hope the agreement is followed in letter and spirit. The development, I sincerely believe, will allow people living alongside LoC and IB to go about their normal lives with minimal disruption and risk,” he said.

People’s Democratic Party (PDP) president, Mehbooba Mufti, said, “It is a big and welcome development.” The former chief minister added, “I have been saying all along that dialogue is the only way forward if both countries want to stop the unending cycle of violence and bloodshed across the borders and J&K”.

Separatist Hurriyat Conference faction headed by Mirwaiz Umar Farooq said, “It is a move in the right direction. It will provide huge relief to the beleaguered people living under constant threat on the LoC and end the bloodshed there.”

It added, “Just as the joint statement correctly points out that ‘in the interest of achieving mutually beneficial and sustainable peace along the borders, the two DGsMO agreed to address each other’s core issues and concerns which have propensity to disturb the peace and lead to violence’, likewise in the interest of mutually beneficial and sustainable peace in the entire region, Governments of India and Pakistan need to address the core concern of J&K in keeping with the aspirations of its people. It is this issue which is the cause of conflict and violence in the region”.