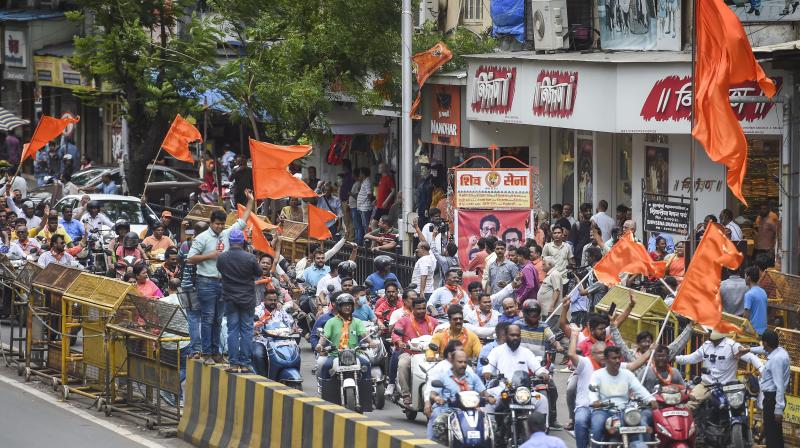 Mumbai: Senior Shiv Sena leader Sanjay Raut on Sunday lashed out at the rebel party MLAs, who are camping in Guwahati, by calling them ‘living corpses’. Rebel leader Eknath Shinde too made his move by challenging the Uddhav Thackeray-led party's decision to disqualify him and 15 other MLA’s in the Supreme Court.

“The 40 people (rebel MLAs) who are there are not alive. Only their bodies will come back here, their souls will be dead. When they step out (of Guwahati) they won't be alive at heart. They know what can happen in the fire that has been lit now,” Mr Raut said.

“The soulless bodies (of rebel MLAs) will come from Assam and will be sent directly to the (Maharashtra) Vidhan Sabha for postmortem,” he added.

The post-mortem dig was in reference to the summons issued by the Maharashtra Assembly deputy Speaker Narhari Zirwal to the 16 rebel MLAs, including Mr Shinde, on the Sena’s plea for their disqualification.

In his plea, Mr Shinde's has challenged the rejection of a no-confidence motion moved against Mr Zirwal. The plea argues that the deputy Speaker recognising Ajay Choudhury as the leader of the Shiv Sena Legislature Party (SSLP) is illegal. Mr Shinde had demanded that the proceedings on the disqualification notices should be stopped until the issue relating to the removal of deputy Speaker is decided.

Mr Shinde in his plea, said that he is constrained to invoke the jurisdiction of this Court under Article 32 of the Constitution challenging the "arbitrary and illegal" exercise of provisions of the Maharashtra Legislative Assembly (Disqualification on ground of Defection) Rules, 1986 by the deputy Speaker, which is completely violative of Article 14 and 19(1)(g) of the Constitution.

"The illegal and unconstitutional action of the deputy Speaker insofar as recognising Ajay Choudhury as the leader of the SSLP despite the said request being admittedly made by a minority faction of the SSLP. Further, the said Respondent No. 1 (deputy Speaker), even after belonging to the minority faction of the SSLP, has also filed a petition under Rule 6 of MLA Defection Rules seeking disqualification of the petitioner under Para-2(1)(a) of the Tenth Schedule of the Constitution of India for which the petitioner received a notice dated June 2, 2022," the plea said.

The petition contended that the seat of Speaker is vacant since Nana Patole resigned from office in February 2021 and there is no authority who can adjudicate upon the disqualification petition under which the impugned notice has been issued to the petitioner.

Mr Shinde, who is MLA from the Kopri-Pachpakhadi constituency of Thane, has challenged the ex-facie illegal disqualification proceedings initiated against him at the instance of Shiv Sena's chief whip, Sunil Prabhu and said he had no authority to issue any whip, having been removed as the chief whip of the Shiv Sena Legislature Party and the consequent issuance of summons issued by the deputy Speaker without verifying the matter.

The Maharashtra legislature secretariat on Saturday had issued "summons" to 16 rebel Shiv Sena MLAs, including Mr Shinde, seeking written replies by the evening of June 27 to the complaints seeking their disqualification.

“MLAs of the Shinde camp are ready to face the floor test in the Maharashtra Legislative Assembly at any time, but first recognition should be given to the Shinde faction. We will not go with the MVA government,” rebel Shiv Sena MLA Deepak Kesarkar said.

Despite the desperate attempts from the party leadership to stem the exodus, another Shiv Sena MLA and Cabinet minister for higher and technical education, Uday Samant, joined the rebel Shinde group in Guwahati. He is the eighth minister and 39th Shiv Sena MLA in the Shinde camp.

Aaditya Thackeray is now the only Cabinet minister from the Shiv Sena quota who is an MLA, while the remaining three from his party are MLCs.