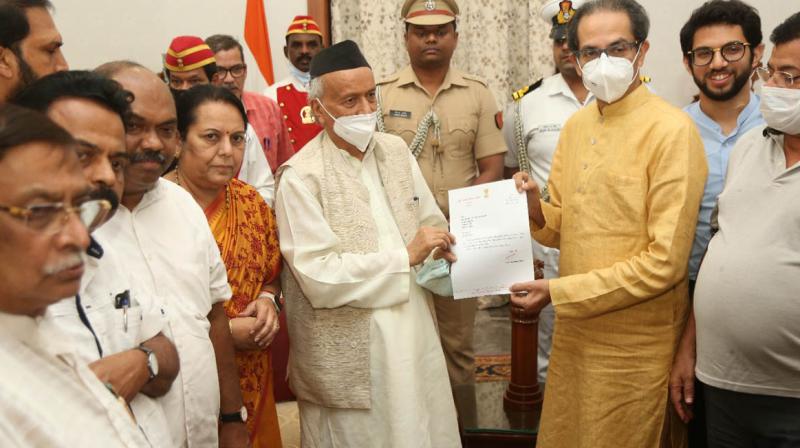 Mumbai: Maharashtra chief minister Uddhav Thackeray on Wednesday resigned from his post virtually minutes after the Supreme Court directed that the floor test in the Maharashtra Assembly at 11 am on Thursday morning should go ahead as scheduled. Maharashtra governor Bhagat Singh Koshyari had directed Mr Thackeray’s Maha Vikas Aghadi (MVA) to hold a confidence vote on Thursday, but this will not be needed now.

The celebrations began at the BJP office in Mumbai and Eknath Shinde’s rebel camp in Goa almost immediately after Mr Thackeray resigned. BJP leader Chandrakant Patil said his party will hold talks with Eknath Shinde and then decide their future course of action. However, Devendra Fadnavis, former CM and Leader of the Opposition, is expected to stake claim soon to forming the new government, maybe as early as Thursday morning. Mr Shinde is likely to be offered the post of deputy CM.

Addressing the state virtually on Facebook Live, Mr Thackeray also said he was resigning as a member of the Legislative Council. “In a democracy, heads are counted to show numbers. I am not interested in that. I don’t want to play these games. Tomorrow, they will say that they have brought down Shiv Sena supremo Balasaheb Thackeray’s son,” he said, while addressing the people of the state.

“I had come in an unexpected manner and I am going out in a similar fashion. I am not going away forever, I will be here and I will once again sit in Shiv Sena Bhavan. I will gather all my people. I am resigning as the CM and as an MLC,” Mr Thackeray added.

In a sarcastic comment, the outgoing CM also thanked the governor for his commitment to securing democracy and calling a floor test within 24 hours of receiving a letter from some MLAs. He recalled that the governor has not taken a decision on the 12 names recommended for the MLC post for one and a half years.

In his speech, Mr Thackeray also addressed rebel MLAs led by Eknath Shinde. “I appealed to the rebels as well to speak openly about who they have problems with: Me? NCP? Or Congress? If the rebel MLAs had placed their demands directly before me and not gone to Surat or any other state, this could have been handled better,” he said.

Mr Shinde and the other rebel Shiv Sena MLAs have landed in Goa and are expected to reach Mumbai Thursday morning. After Mr Thackeray's resignation, Mr Shinde said: “This is the victory of Balasaheb and Anand Dighe's ideals.”

Earlier, Mr Thackeray also delivered an emotional speech at the Cabinet meeting held at around 5 pm, in which decisions to rename Aurangabad and Osmanabad as Sambhaji Nagar and Dharashiv were taken.

Mr Thackeray thanked his Cabinet ministers and bureaucrats for their support in the last two and a half years and also sought their forgiveness for any mistakes that he may have committed. “Today’s situation has arisen because my own people betrayed me,” he said at the Cabinet meeting.

The Shiv Sena had moved the Supreme Court challenging the governor’s order to hold the floor test on Thursday. However, the Supreme Court said a floor test was the only way to settle all issues that have entangled the politics of Maharashtra following a rebellion by Mr Shinde, leading to a political crisis. The court said the results of the floor test will be subject to the final outcome of Shiv Sena chief whip Sunil Prabhu’s petition against the governor’s decision and issued a notice on the plea.