Every piece of matchstick art that Bipin Lal makes has a story to tell. 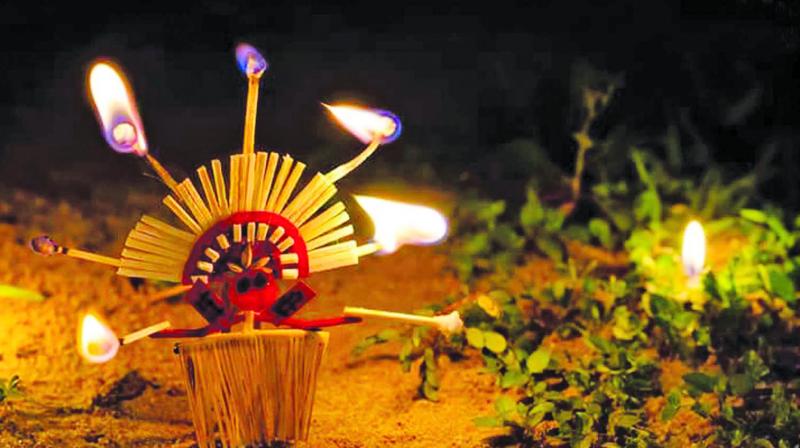 Another piece close to his heart is on Theyyam art, which was an experiment with clay and matchsticks.

K.R. Bipin Lal is a man of many talents. He is a photographer and a magician. But his most unique skill is that he creates matchstick art. Bipin has over sixty matchstick art pieces in his collection. “I have seen matchstick art on Facebook. I studied it and started experimenting with matchstick figures since last year,” he says. His matchstick art themes are mostly inspired from daily life.

Bipin, who works at the district panchayath in Thiruvananthapuram, is a native of Chirayinkeezh. It should then come as no surprise that he first created matchstick art for a district panchayat project on Mazhathavalam, about rainwater harvesting.

According to Bipin, each matchstick art piece has a story to tell and he wants to convey a message through his work. He also adds that it’s not possible to give emotions to this art form and so the message is conveyed only through perfect body angles.

Old matchstick models would be seen as buildings and vehicles. Today, human figures can be created in 3D forms, he says. “A friend of mine sent me the pictures of cloth matchstick figures. I experimented with those and with 3D animation, gave them more perfection,” he adds.

At the Soorya Festival last year, during a photography exhibition named ‘Art and Alchemist’, ten of Bipin’s  were exhibited; two photographs related to matchstick art and the rest included various art forms.

His dream is to hold an exhibition of matchstick art and photography. He is also planning for a space where he can maintain his works for long. His favorite piece is of a rickshawala in Kolkata. Another piece close to his heart is on Theyyam art, which was an experiment with clay and matchsticks. Now, he experiments with macro matchsticks that are thinner. “Some of my friends suggested I combine matchstick art and literature. So I experimented with matchstick art on stories and poems from Malayalam literature. That’s my latest experiment,” says Bipin.

He’s also a magician who has done various magic shows and is a guest faculty member at Gopinath Muthukad’s Magic Academy, Poojapoora.

“In every generation there are genuine art lovers. I try to learn from them and then add my own creativity in whatever I do,” he quips.