Nature, tech on a haute date

Amit Aggarwal takes inspiration from crystals and chrysalis to design his debut collection at the Indian Couture Week. 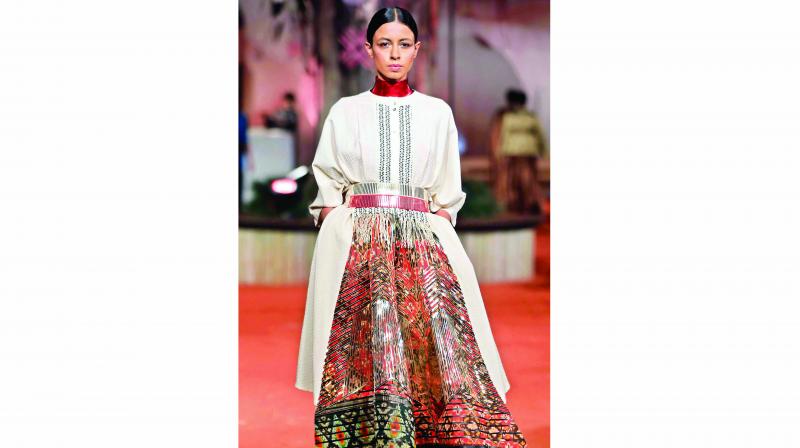 A sample of Amit Aggarwal’s work from his previous collection, the making of his ‘Crystalis’ collection and the designer himself

Known for his innovative design sophisticatedly woven with his commitment to environmental sustainability, Amit Aggarwal is ready make his mark at the India Couture Week. For his debut, Aggarwal has come up with his collection ‘Crystalis’, inspired by the formation of crystals at a molecular level and the chrysalis around a butterfly’s cocoon.

Aggarwal believes that the two pillars of his design — crystals and chrysalis  — resonate well with his design process. “Both concepts are bound at their very core by the idea of units, sometimes geometric and sometimes organic, coalescing together to form complex structural formations in our physical world. This phenomenon greatly resonates with our design process, one that’s centered on forging unique materials together to create singular design units and then repeating them to create complex patterns, textiles and embroideries,” shares Aggarwal, who came across a video on the natural phenomenon of crystal formation which really stuck with him. “I was inspired by nature’s awe-inspiring forms and took that as the starting point for our design process, we then worked on aligning the process with our signature style. The idea core of the collection revolves around the beauty of how a single unit is replicated to form a complex, multi-dimensional pattern.” 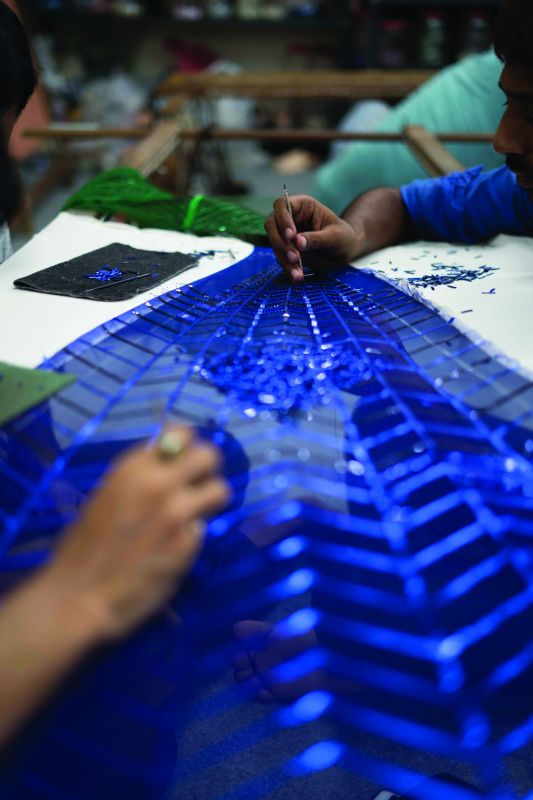 To complement his theme, Aggarwal made sure that everything was in sync  — from the form and texture of the design elements to the colour palette. “The form and texture of our design elements have been specifically designed to be sharp, angular and crystalline in appearance to reflect this core inspiration. The metallic encasing that forms around the cocoon of a butterfly, the chrysalis, has been a formative aesthetic influence in this collection in equal measure.”

Aggarwal has explored a range of three-dimensional hand embroideries in various crystalline and bio mimicked forms and motifs. “The meticulous hand embroideries are inspired by organic forms and angular structures, which are then adorned with our signature polymer detailing that has been used in conjunction with multiple textile techniques to create dimension and surface texture that mimic crystalline composition and lines.”

The silhouette has been used to extenuate the drama without negotiating on traditional aspect. “One of the most compelling stories in our couture 2018 presentation is our extensive silhouette exploration, morphing different aspects of traditional Indian and Western couture shapes with each other and infusing them with structure and form to enhance the female body,” shares Aggarwal, who has used a palette consisting of jewel tones of rose quartz, silver onyx, emerald, amethyst, topaz and sapphire, as well as metallic shades of rose gold, silver, pewter and light gold.

For Aggarwal, design needs to be sustainable too. “By understanding how workmanship can be used in alliance with latest advances in technology, we have worked on creating a new language of sustainability. Using modern industrial materials along with age-old techniques of zari and zardozi, our textiles have been replaced with something radical,” adds Aggarwal, who believes that the future of Indian couture is not just bridal anymore. “I feel couture in the modern language is going to open a lot of doors with younger generation today setting up different avenues or different possibilities to wear something unique and special. Couture will be a wider terminology in the future.”