Antara casts off the shackles of his early life to rise as a warrior and claim his rightful place as the son of Shaddad, leader of the Banu Abs tribe. 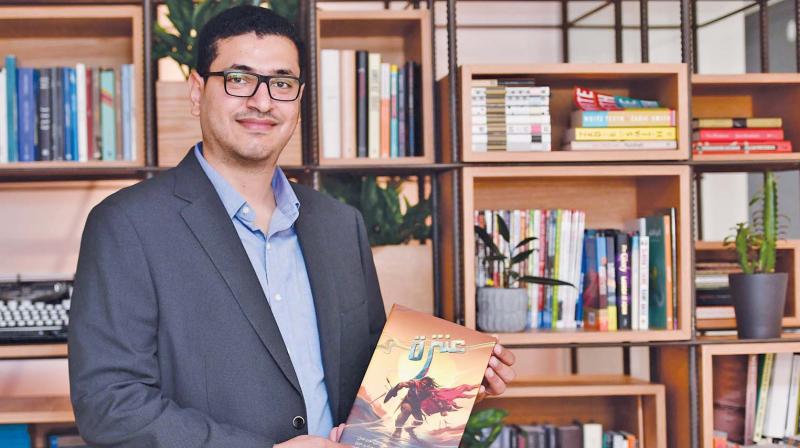 Comic artist Mumen Hilmi poses in his office with his illustrated comic book ‘Antara’ in the Gulf emirate of Sharjah on September 18, 2018. Antara, an Arab poet and war hero who suffered from racism and rejection because of his dark skin colour, is now a star of an Arabic comic book. (Photo: AFP)

In a red cape, dark hair blowing in the wind, he crosses the dunes under a blazing sun: Antara, the famed 6th century Arab poet born a slave, is now a superhero. A pre-Islamic poet, Antara is celebrated in the collective memory of Arabs as well as in pop culture — a child born to a tribal leader and his Abyssinian slave who rose as a warrior-poet to free himself and demand his father recognise him as his son, and a free man.  Now, he stars in his own comic strip, reimagined as a shield-wielding, cape-wearing superhero by Egyptian writer Mumen Hilmi and renowned Indian illustrator Ashraf Ghuri. The story of Antara breaks across the class and race lines that frequently dominate society, the “perfect example of what it means to be a superhero,” writer Hilmi says.  “Arabs like the exaggerated personality traits of heroes, and we thought why not transform Antara into a superhero like those you see in the US, Europe, Japan.” “Antara” is the first comic strip to be published by Kalimat, a publishing house based in the UAE emirate of Sharjah which specialises in Arabic translations of Japanese manga and US cartoonist Nick Seluk’s series, The Awkward Yeti and Heart and Brain. The story weaves a tale of bravery, slavery, freedom, loyalty and love — and co-stars his beloved Abla, daughter of a tribal sheikh and object of Antara’s undying affection.

Antara casts off the shackles of his early life to rise as a warrior and claim his rightful place as the son of Shaddad, leader of the Banu Abs tribe.  But the facts of Antar-a’s life remain unclear: one tale holds that Ant-ara ibn Shaddad al-Absi was born to an Ethiopian prince-ss; another more popular tale holds that he was born to a dark skinned Abyssinian slave.  Antara’s father, a tribal chief from what is today western Saudi Arabia, refused to recognise his son, who was thus born a slave.  Antara rebelled against his status as a slave when, after valiantly defending his tribe, he was given only half the compensation granted to warriors.  He went into self-imposed exile in the desert and refused to participate in the defence of his tribe — until he was one day called on to come to the aid of his people. Legend has it that that was how Antara earned his freedom.  The comic strip narrates “the beginning of his life as a slave, mistreated by his tribe because of the colour of his skin and the status of his mother, to become a hero on the frontline,” Hilmi says. Antara’s strength is matched only by his poetry, which has two main themes: his wartime exploits, and his love for his cousin Abla, the daughter of a tribal sheikh. Whether Antara and Abla’s love story had a happy ending, or ended in tragedy, no one knows.  But Antara’s famed poetry is still taught in curricula across the Arab world, with his “Mu’allaqa” — part of the pre-Islamic canon of Arabic poetry — hung in the holy city of Mecca and still the source of many a catchphrase in popular culture.    “Often I’ve defended/the women of Amir/ their legs slim/and tender as stalks/ from the onslaught of armed raiders,” reads an English translation of Antara’s “War Songs”, published by NYU Press.  “I won’t be able/to outrun Fate/when she comes. “Cowards run. I stand/my ground.”

Antara has served as the inspiration for artists and musicians around the world, with 19th century Russian composer Nikolai Rimsky-Korsakov dedicating a symphony in four movements to his story. The creators of the “Antara” comic strip believe the legend will resonate with modern audiences both within the Arab world and across the globe.  “This story has universal appeal,” said Hilmi, particularly as it deals with racism.  “We incorporated illustrations of what we imagined to be Antara’s childhood, when he first faced discrimination and mistreatment at the hands of his peers and his father.”  The cause of Antara’s death is also a matter of debate, with some saying the warrior died of natural causes and others pointing to evidence that he was killed by a poisoned arrow.  The comic strip does not offer answers.  While it leaves questions of Antara’s life and demise hanging, the creators’ focus is quite clear.

In a face-off with his father, a bearded Antara clenches his fist and stands tall: “I want nothing but what every child wants of his father. “Tell me, am I slave or son?”