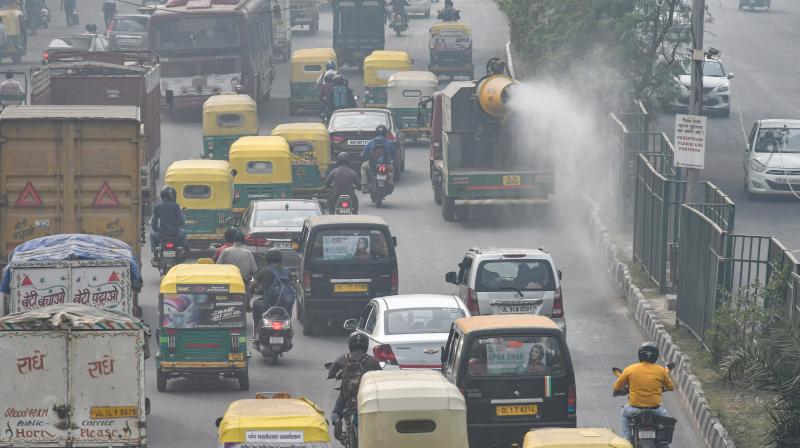 An anti-smog gun is used to spray water to curb air pollution, in New Delhi, Friday, Nov. 4, 2022. According to Central Pollution Control Board data, the overall Air Quality Index (AQI) of Delhi stood at 426 at 9:30 am in the 'severe' category. (PTI Photo)

NEW DELHI: Alarmed by the hazardous pollution levels in Delhi, the AAP government has ordered the closure of all primary schools in the city from Saturday and directed 50 per cent of its staff to work from home in the national capital.

As the city’s air quality remained in the “severe”zone for the second consecutive day on Friday, chief minister Arvind Kejriwal said all primary schools will be shut from Saturday in a bid to protect children from the effects of worsening air. The schools have also been asked to curtail outdoor activities of their senior students.

Delhi’s skyline was blanketed with thick smog and the overall Air Quality Index (AQI) went up to 445 at 2 pm Friday. An AQI of above 400 is considered “severe” which can affect healthy people and seriously impact those with existing illnesses. Almost all air quality monitoring stations reported “severe” air quality, while 13 of them logged an AQI of more than 450.

Delhi environment minister Gopal Rai ordered that 50 per cent employees of the Delhi government should work from home and said an advisory will be issued soon to all private offices to follow suit. He said the “odd-even” car rationing scheme might also be implemented if the need arises and that discussions on it are on. The revenue commissioners have been asked to prepare a plan for staggered timings of markets and offices.

Mr Rai said the Delhi government has decided to implement the anti-pollution curbs recommended by the Commission for Air Quality Management, including a ban on non-BS VI diesel-run light motor vehicles. The entry of trucks, other than electric and CNG ones, has also been banned in Delhi. Those carrying essential commodities have, however, been exempted. A study conducted by the Energy and Resources Institute in 2018 showed that vehicular emissions account for around 40 per cent of the PM 2.5 pollution in the capital.

The Delhi government has also requested Haryana and Uttar Pradesh to divert trucks from the entry point of peripheral expressways around the city. In a bid to ramp up public transport, the government will also launch the “Paryavaran Bus Service”, that will include 500 privately-run CNG buses.

Mr Rai said a six-member panel chaired by the special commissioner, transport, has been set up to monitor the implementation of the curbs on polluting activities. It will have two members each from the transport department, the traffic police and the Delhi Pollution Control Committee.

Mr Kejriwal and Punjab CM Bhagwant Mann acknowledged responsibility for paddy straw (parali) burning in the border state and promised to curb the practice by next winter. The burning of paddy straw has been one of the main factors behind the worsening air pollution in Delhi.

Mr Kejriwal said air pollution in the winter was not a “Delhi-specific problem”, saying it affected the whole of northern India and that there should be no blame game and politics over the issue. He urged the Centre to come forward and take specific steps to save north India from pollution.

An analysis conducted by the Delhi Pollution Control Committee in 2021 showed people in the capital breathe the worst air between November 1 and November 15, when the stubble burning peaks. The share of stubble burning in Delhi’s PM2.5 pollution jumped to 34 per cent on Thursday, the highest this season so far, which experts said was the reason behind the thick layer of smog persisting over Delhi-NCR.