The three sanitation workers died on Sunday after inhaling toxic gases while cleaning a gutter in Lajpat Nagar. 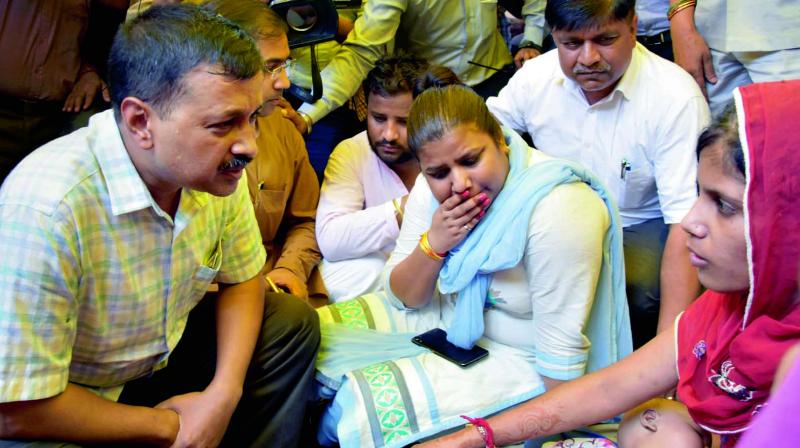 Chief minister Arvind Kejriwal meets the family members of one of the sanitation workers who died due to asphyxiation in a sewer. (Photo: PTI)

New Delhi: Delhi chief minister Arvind Kejriwal on Tuesday announced financial assistance of Rs 10 lakh to the families of each of the three sanitation employees who died while cleaning a gutter. He also promised a government job to one family member.

The three sanitation workers died on Sunday after inhaling toxic gases while cleaning a gutter in Lajpat Nagar. The chief minister met the family members of the deceased and announced the compensation.

“A financial assistance of Rs 10 lakh shall be granted to the affected families. One family member of each of the victims would be given a government job,” he said. “I have ordered a probe. Those guilty will not be spared and punished under the law.”  He said that a high powered committee would examine why such incidents were happening and required action would be taken to check them.

Meanwhile, Mr Kejriwal said that a probe has been ordered into the incident. “We will form a high-powered committee to examine why such incidents keep happening. This is the second such incident in a month. We will try and figure what can be done to prevent such incidents,” the chief minister said.

The police has already registered a case of culpable homicide not amounting to murder against the private contractor who hired the three to clean the DJB sewer line, but did not provide them with necessary protective gear.