In Jamia, the trouble began in the afternoon when the police refused permission for the march and it escalated as the day progressed. 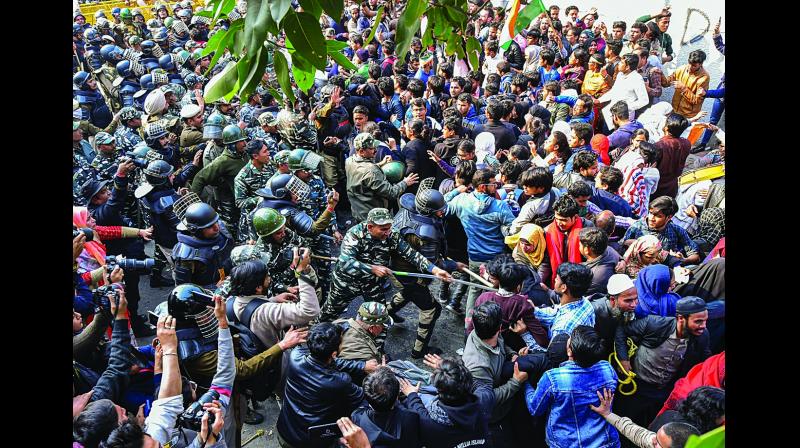 Jamia Police baton charge protestors to push them back during their march against the amended Citizenship Act, NRC and NPR, near Jamia Nagar in New Delhi on Monday. (Photo: PTI)

New Delhi: Scores of Jamia Millia students and residents of Jamia Nagar, on Monday, were allegedly beaten by the police after they refused to end their protest and insisted on carrying an anti-CAA (Citizenship Amendment Act) march towards  Parliament.

They were stopped, following which the students started a sit-in protest outside the varsity. Meanwhile, in another similar protest, hundreds of people including civil society members protested in the Mandi House area.

The protesters, carrying placards and banners of all sizes and colours, converged at Mandi House around 11.00 am and started marching towards Jantar Mantar where they reached around 12.30 pm via Barakhamba Road and Tolstoy Road. A large number of police and paramilitary personnel walked along with them.

In Jamia, the trouble began in the afternoon when the police refused permission for the march and it escalated as the day progressed.

Some of the protesters have been detained by the police, officials said.

Despite repeated appeals from the police and the varsity administration, the protesters refused to end their agitation which started following a call by the Jamia Coordination Committee (JCC), an organisation of Jamia students and alumni.

The protesters, including several women, began their march from Jamia’s gate no. 7 around noon amid heavy deployment of security personnel in and around the university.

The altercation intensified by 6.00 pm as the students refused to budge and a group of protesters gheraoed the Sukhdev Vihar police station. Some protesters jumped over barricades as the police, in riot gear, thrashed them.

As the number of people joining the protest swelled by the evening, the Sukhdev Vihar Metro station near the university was closed.

Men formed a human chain on either side of the road as women walked ahead, waving the tricolour and raising slogans of “Halla Bol.”

Despite repeated appeals from the police and the varsity authorities, the protesters refused to end their agitation. The police said that the protesters did not have permission to march towards the Parliament.

The protesters raised slogans like “kagaz nahi dikhayenge” (we will not show documents) and “jab nahi dare hum goron se toh kyun dare hum auron se” (When we did not fear the British, why should we fear others).