According to him, the security personnel maintain tight vigil round-the-clock and this cannot be categorised as a case of security breach. 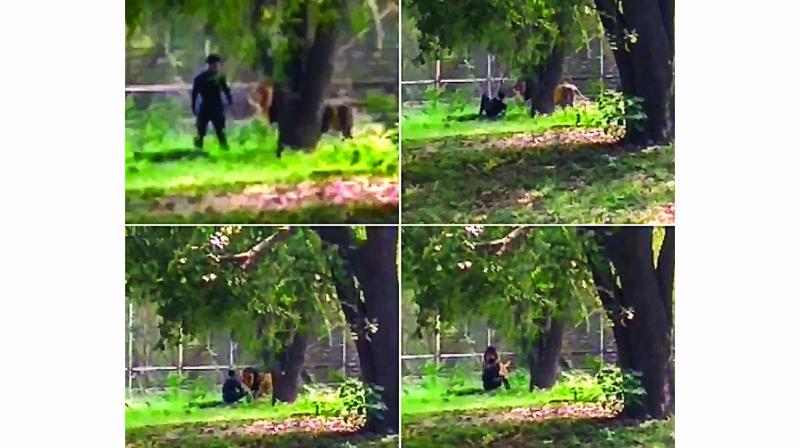 Rehan Khan, a native of Bihar, jumped inside the enclosure of a lion at Delhi zoo on Thursday. (Photo: PTI)

New Delhi: A 25-year-old mentally unstable man leapt into the enclosure of a lion at the Delhi Zoo on Thursday. He came face to face with the big cat and moved around, unconcerned about the lurking danger, before the zoo staff rescued him after tranquillising the animal.

The incident brought back the dreadful memories of a 2014 episode when a white tiger mauled a man to death after he had jumped inside its enclosure in the Delhi Zoo. The ghastly incident had hit the headlines world over, prompting the zoo authorities to review security measures.

On Thursday noon, Rehan Khan, who hails from Bihar’s East Champaran district and currently lives in Delhi’s Seelampur area, jumped down 20 feet into the moat, walked up to the lion and casually sat in front of it. All of this happened within a few seconds, a zoo official said.

The Delhi Zoo curator and spokesperson, Riyaz Khan, said that the security personnel tried to stop the man. However, before they could get hold of him, he jumped into the moat.

“Delhi Zoo security officer Rohit Kumar and range officer Saurabh Vashishtha were among the first ones to respond to the situation. Zoo director Renu Singh supervised the rescue operation that lasted around 15 minutes,” another official said.

“Our rapid response team tranquillised the lion from outside before entering the enclosure ,” Riyaz Khan said.

According to him, the security personnel maintain tight vigil round-the-clock and this cannot be categorised as a case of security breach.

Unlike in 2014, when the zoo staff took longer to save the intruder, this time they acted swiftly and followed a standard operating procedure prepared for such situations.

“The zoo administration has kept a ladder in the enclosure of every carnivore. Using this ladder, Kumar and Vashishtha climbed down inside the animal’s enclosure while its handler tried to distract him,” he said.

A video of the incident, which took place at around 12.30 pm, soon became viral. The video clip showed the man squatting down on a plank in front of the animal. He lied down and quickly rose to a sitting position again.