The protesters had assembled at the Vigyan Bhavan and raised slogans against the Congress and its president. 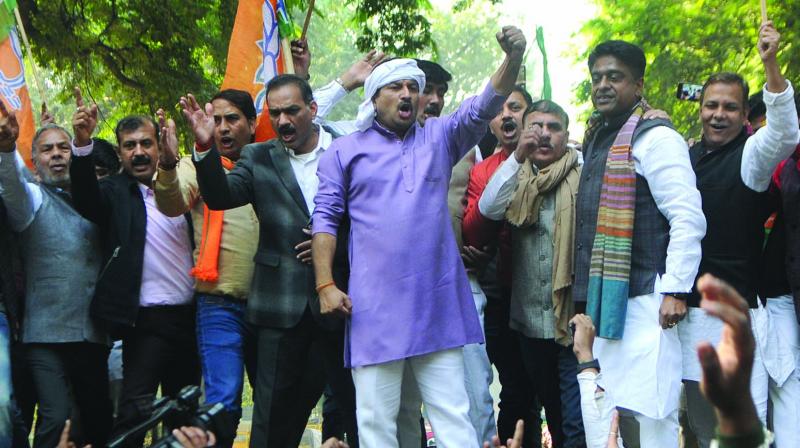 BJP president Manoj Tiwari with party supporters during a protest against Congress president Rahul Gandhi over the alleged scam in Rafale deal outside the AICC office in New Delhi on Wednesday. (Photo: Biplab Banerjee)

NEW DELHI: Leaders and workers of the BJP’s Delhi unit, along with its president Manoj Tiwari, were detained near the Congress headquarters on Wednesday while they were protesting against Rahul Gandhi, who they said was spreading ‘lies’ on the Rafale deal.

The protesters had assembled at the Vigyan Bhavan and raised slogans against the Congress and its president, who has been instrumental in mounting a scathing attack on the Modi government over alleged Rafale scam.

“We are here to expose the lies of Congress and its president Rahul Gandhi who is spreading lies on the Rafale deal on a regular basis. It has now become clear that the Congress is indulging in the propaganda of falsehood and conspiring to mislead the people. The reality is that Rahul wants to cover up the sins of Congress. His restiveness clearly shows that the reason behind the failure to finalise Rafale deal previously was that the Congress wanted some scope for corruption in the deal and the party which is afflicted with corruption, is expressing its frustration through Rahul,” said Mr Tiwari.