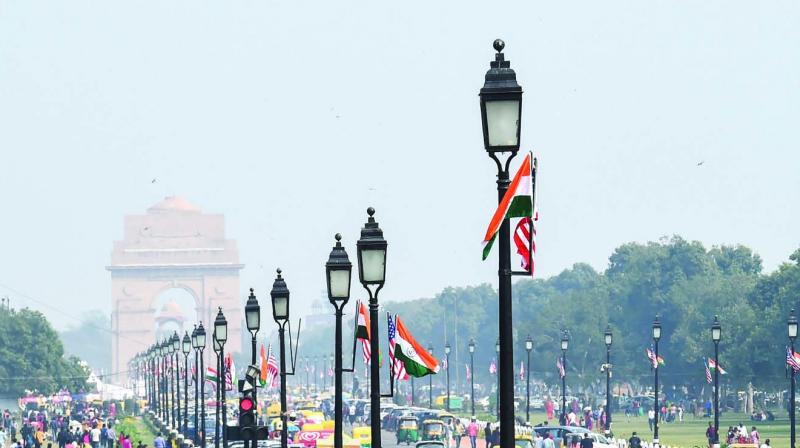 India and US flags near Rashtrapati Bhavan at Raisina Hill ahead of the US President Donald Trump's visit, in New Delhi on Sunday. (Photo: PTI)

New Delhi: An unprecedented security cover with anti-sabotage teams involving the Army and paramilitary has been put up at the ITC Maurya, the hotel where US President Donald Trump will check-in on Monday. The forces, along with close coordination with the US Secret Service, are conducting checks on the routes to be taken by the visiting dignitary.

Anti-drone detachment of NSG, snipers, elite SWAT commandos, kite catchers, canine units, sharp shooters on high-rise buildings, and Parakram vans have also been deployed along the routes and areas in and around the hotel where Mr Trump will be staying.

Police personnel from six districts have been deployed for the security arrangements and nearly 40 companies of the Central Armed Police Forces (CAPF) have been pressed into action.

Hundreds of high-definition CCTV cameras with night vision have been installed across the Sardar Patel Marg where hotel ITC Maurya is located to monitor the situation round-the-clock, the officials said.

Five years ago, when Mr Trump’s predecessor, Barack Obama, visited the national capital, the Delhi police had rented 605 CCTV cameras and spent more than `1 crore in hiring, installing, and later removing them.

In view of the spiralling tensions between Iran and the US, there is a higher security threat this time and the agencies are more “cautious and alert” than ever.

A senior police officer said: “We have also requested anti-sabotage checking teams from the paramilitary and the Army. They have been regularly conducting anti-sabotage checks along every route to be taken by the US President during his visit here.”

Besides the multi-layer security cover, elaborate arrangements have been made by the Delhi police, including placement of double barricading on all the roads where Mr Trump’s convoy is likely to pass, officials said, adding that aerial surveillance of the route will also be conducted as part of the security measures.

Jersey barriers (modular concrete or plastic barriers placed to organise traffic into lanes) will also be put up on the route. The Delhi police is also working in close coordination with the civic bodies.

According to officials, the route leading to a Delhi government school, where US First Lady Melania Trump is scheduled to pay a visit, will also be under a high security cover. Trees have been trimmed according to the directions of the security agencies as part of the protocol.

Meetings have also been held with US security agents on the elaborate security arrangements in place.

At the ITC Maurya, a three-layer security will be in place. The hotel, located in Diplomatic Enclave in Chanakyapuri, will have police personnel in plain clothes patrolling every floor.

The Delhi police’s security wing personnel will form part of the inner cordon that will work in close coordination with the United States Secret Service.

The floor, where the grand presidential suite is located at the ITC Maurya, is out of bounds for most hotel staff owing to the elaborate security arrangements. Sources said that security arrangements at the hotel have been underway for the last two weeks with NSG commandos and Delhi police personnel surveying every floor on a daily basis.