They also stated that 4,500 mangroves were destroyed while the NHAI's expansion work of Highway 348 near Punjab Warehouse CFS. 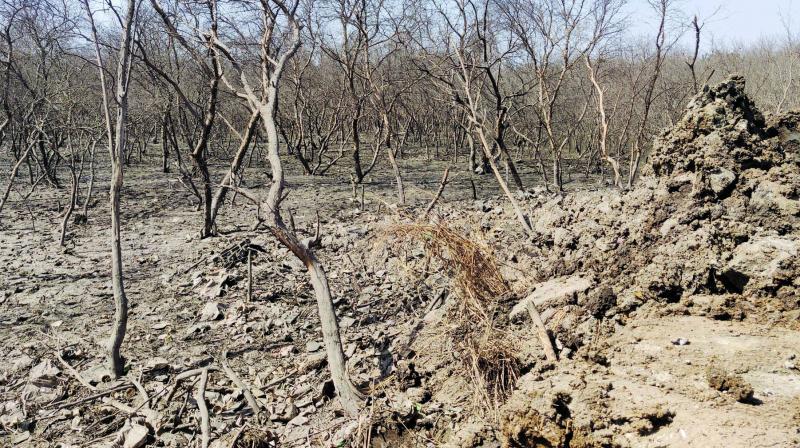 Vast stretches of wetland has been lost.

Mumbai: After the intervention of chief minister Devendra Fadnavis regarding the destruction of wetlands in Navi Mumbai Special Economic Zone (NMSEZ), the work of reclamation has been stopped. Even though the green activists have appreciated the state mangrove committee for halting the landfill at sites in ecologically sensitive Uran area, they have urged the panel to take action against the culprits.

Although the dumping of truckloads of debris and soil has stopped in NMSEZ, environment groups have stated that they are not sure about the same in JNPT area since some truck movement can be still seen in Dastan Phata and other areas.

"We are sceptical of the decisions being implemented as JNPT and National Highway Authority of India (NHAI) have not heeded to the mangrove committee orders not to destroy wetlands and mang-roves,”said Nandkumar Pawar, head of Shri Ekvira Aai Pratishtan.

He further said, “We have lost permanently the Dastan Phata wetland due to landfill by JNPT and we do not see any signs of restoring it.”

“Though the landfill has been stopped for now, enough damage has already been done mangroves,” said activist B.N. Kumar, director of The Nature Connect.

The groups highlighted that vast stretches of wetlands have been lost and high tide water flow was forcibly diverted causing floods in several villages during full-moon period.

They also stated that 4,500 mangroves were destroyed while the NHAI's expansion work of Highway 348 near Punjab Warehouse CFS.

“We, therefore, request you to initiate criminal proceedings against the violators and ensure justice. We were told that an FIR has been filed against JNPT in an earlier case of killing of 4,500 mangroves during the construction of Container Terminal-4. But no authority is sure of the action thereafter,” the activists’ mail said.

“Our fear is that landfill could be resumed clandestinely, as it happened in the case of JNPT, and the wetlands will be lost forever. Our teams which went to file FIRs against erring project proponents to which the police told them that it is not their lookout,” Mr Kumar said.