500 kg garbage removed from the 100 mts stretch of the water body. 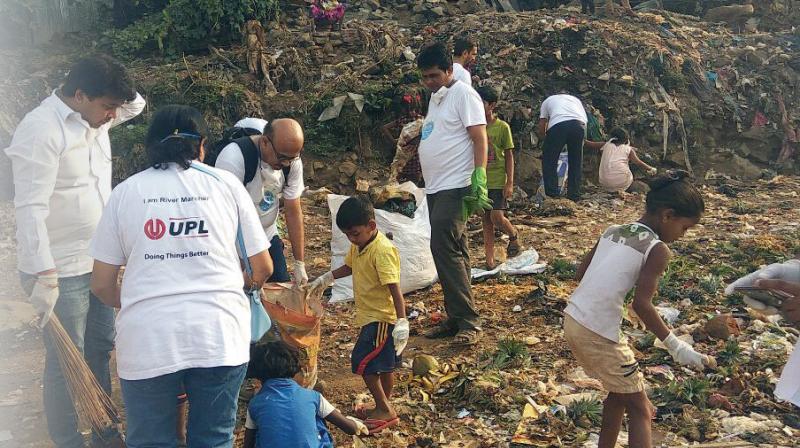 The Environmental Policy and Research India (EPRI) in 2014-15 stated that the Poisar River is exceedingly polluted by a 100 times over the prescribed safety limit.

Mumbai: During its first river cleanliness drive after the monsoon, a citizens group River March removed 500 kg of garbage from Poisar river on Sunday.  The clean up was conducted on the first 100 meters stretch of Poisar river in Kranti Nagar, Kandivali. The clean up drive started early morning on Sunday. No machinery was used, and citizens cleaned up the stretch manually throughout the day.

The Brihanmumbai Municipal Corporation (BMC) had last month cleaned up the river stretch as part of its post-monsoon desilting work. However, citizens were shocked to find the amount of garbage recovered. “We were appalled at the horrific sights of mound and garbage heaped on the river banks. The waste had all sort of things from plastic to human waste. The foul smell made it difficult for us to stand at one place for more than 15 minutes,” said Sagar Vira, a member of River March.

“Around 80 per cent of the river waste was removed at pre-monsoon and monsoon level. We had also done desilting on the river stretch last month as part of post-monsoon work,” said Vidyadhar Khankar, chief engineer, storm water drains department of BMC.

The citizen group has decided to intensify its awareness programmes in the slums of Kranti Nagar to urge people not to throw garbage in the river. “We have also requested the BMC for proper collection of garbage as residents have complained that the garbage is not collected regularly,” added Mr Vira.

The entire stretch of Poisar River is dotted with 70,000 hutments, out of which around 7,000 hutments are in the Kranti Nagar area, Kandivali. Residents have stated that for all lanes in the slum area, the civic body has provided just one huge dustbin, from which the garbage is collected by the BMC in every two or three days. “We have requested the civic officials of the area to arrange for a large garbage bin, a clean up marshall to monitor and a board displaying a warning of payment of fine for those littering the area to be made,” said Gopal Jhaveri, another member of River March.