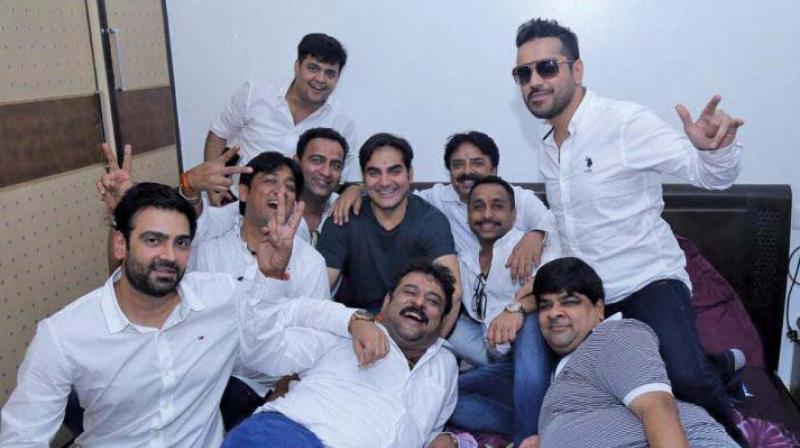 Arbaaz Khan with Sonu Jalan and other bookies.

Mumbai: The Thane crime branch has registered a fresh case as part of the probe into the ongoing cricket betting scam, and named fugitive gangster Ravi Pujari as alleged link.

The police said that bookie Sonu Jalan, who was arrested in the case, had to recover Rs 3 crore from a spices’ businessman who lost the amount while placing bets. Jalan allegedly asked Pujari to call the businessman and extort the money from him using threats. The police is likely to invoke the stringent provisions of the Maharashtra Control of Organised Crime Act (MCOCA) in the case.

The officials said that MCOCA provisions could be invoked against Jalan and Pujari with the latter having several cases registered against him with Thane and Mumbai police. The process of invoking MCOCA has begun. The fresh case was registered with the Thane nagar police station on Saturday, and the police said that six persons including Jalan, Pujari, Munir Khan, Kiran Mala, Surendra Bagri alias Junior Calcutta, and Ketan Tanna alias Raja were named in it. The complainant allegedly owed Jalan around Rs 3 crore which he had lost in cricket betting.  The police learned that since Jalan could not recover it, he sought help from Pujari.

Rajkumar Kothmire, police inspector of Thane anti-extortion cell, said, “Pujari made threat calls to the spices’ businessman, demanding the money, and when he failed to pay it, they decided to take over his flat and also kidnapped the victim from Thane.”

Jalan and Tanna bundled the victim into a car from near Talaopali lake and took him to Goregaon where the other accused persons were present. They threatened the businessman and later drafted documents pertaining to the takeover of his property located in Mahavir Nagar, Kandivali. The incident took place on January 22. The power of attorney of the Kandivali flat was taken over along with Rs 25 lakh from the businessman and they threatened to kill him if he failed to abide by them. The victim stays in Borivali but since he was kidnapped from Thane, the case has been registered with the Thane nagar police station.

The police has registered a case of kidnapping, extortion, criminal intimidation, acts of con intention as per the Indian Penal Code, and further probe is underway.