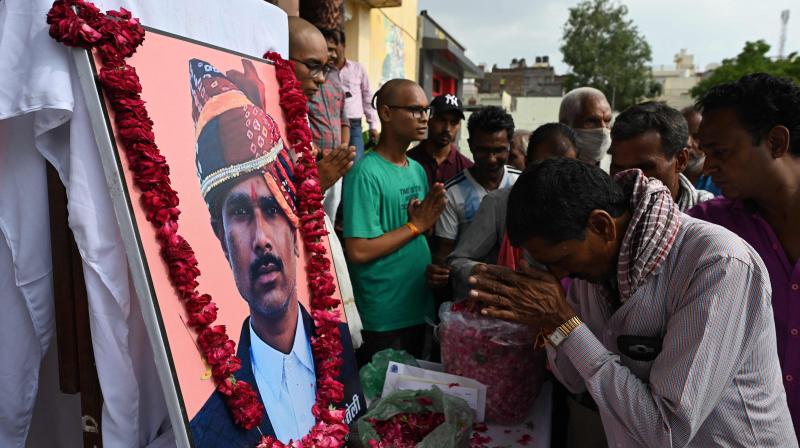 People pay their respects to slain Hindu tailor Kanhaiya Lal, who was allegedly killed by two Muslim men for supporting a former spokeswoman of the railing Bharatiya Janta Party for her remarks about the Prophet Mohammed, in Udaipur on June 30, 2022. (AFP)

Dial down the hate. Now. One cannot say these words loud or often enough. They capture the greatest need of the hour in this country.
As I write, comes the news of the barbaric hacking to death of Kanhaiya Lal, a tailor in picturesque Udaipur, Rajasthan. The savagery must be condemned unequivocally by everyone. The attackers, identified as Gaus Mohammad and Riyaz, have claimed that their act was in retaliation for the victim’s alleged support of suspended BJP spokesperson Nupur Sharma’s remarks about Prophet Mohammed. The duo filmed the hacking and posted it online. Media reports claim that they threatened Prime Minister Narendra Modi as well.

Clearly, the intention of the two men is to rouse hatred and instigate violence. They have been arrested. The National Investigation Agency is probing the crime.

At this point, the immediate priority must be to stop the spread of sectarian passions and sledgehammer the need to start the process of dialling down experiments in hate. The impact of toxic hate speeches and hate crimes in recent years has gone deep into the gut of our society. It cannot be eradicated overnight.

But we must make a start.

Faced with a deluge of half-truths, blatant lies, and mass-erasure of unpalatable truths, what options do we have? It is easy to give up, yield to despair and say the ordinary person -- who is neither a hero nor a villain -- can do little.

But here is another truth. We owe it to ourselves to protect our minds and souls as much as our bodies. And we can if we try hard enough.
We may not be able to control everything happening around us, but we can protect ourselves to a great extent by being aware that there is a battle of competing narratives and that we must not uncritically buy into anyone else’s assumptions and truths.

This means keeping eyes and ears open, developing our own propaganda detectors, recognising that there is an orchestrated attempt to drown us in half-truths and lies, both of which have been in abundant supply in recent times in our social media-saturated world. Out of the two, the half-truth is the more insidious and dangerous because it contains an element of truth but by being selective and leaving out critical bits, it twists the original.

This is especially important in a hyper-polarised nation.

A starting point can be resistance to stereotyping of any community. It is important to occasionally step back from the “news” of the day or week, to try and understand the process which is strengthening prejudices, “otherising” of communities and belittling their struggles, sorrows and despair. It is especially important not to come to sweeping conclusions about any community due to the misdeeds of some.
As a member of the majority community, in a relatively privileged position, I try to imagine what it is to be like the “other”, for example, a Muslim.

One of my earliest lessons in this direction was when I was commissioned by the late Asghar Ali Engineer, a legendary name in the world of academics, activism and human rights within and outside the country, to do a small, sample survey on marital practices and demographic patterns among Muslims, and how it is affected by family income and educational status of Muslim women.

I carried out the sample survey in Delhi, speaking to people in 30 randomly-selected households. It was my first foray into discovering how half-truths can shape our thoughts, contribute to myth-making and strengthen prejudice. I spent two months in 1990 and 1991 doing the survey. It was published in 1992.

A highly popular myth that was proved completely false by the survey was that the majority of Muslim men were polygamous. In the 30 households surveyed, across different income groups -- high, middle and low -- there was only one instance of a man with two wives.
Another myth that proved to be false pivoted around the supposedly high frequency of divorce and remarriage among Muslims, both men and women. Of the 30 women that I spoke to at length, only two reported that their husbands had been married earlier and had divorced their first wives before marrying them.

The correlation between the educational status of the women I spoke to and the number of children they had also became patently clear. Of the 30 women interviewed, 17 had more than three children. None of them had any formal education though six women could read some Urdu.

Among the rest there were seven women who had been to middle school and beyond. What was interesting -- even illiterate women with smaller families were keen to send their children to school, just like people in the majority community. Equally clear was the correlation between family income and the number of children. The family size became smaller as the income went up.

So how do you check out myths? By finding out for yourself, by questioning. In India, we do not question enough. We must. Only then will we become more aware of half-truths.

Take the latest national family health survey (NFHS-5). One rabidly partisan publication says: “Muslims in India have the highest fertility rate of any religion, whereas Buddhists have the lowest.” There is related information the publication leaves out, but many others note -- NFHS-5 data also reveals a steep decline in the Total Fertility Rate (TFR) of the Muslim community over nearly three decades.

The battle to influence worldviews extends to textbooks. Consider the proposed changes to the history textbooks. As academic Anubhuti Maurya, who teaches history at Shiv Nadar University, pointed out in a recent commentary piece: “The stories of India’s past are complex and diverse. It is unjust to fit it into simple accounts of golden and dark ages, of great and bad men, of remembered and imagined hurts. The proposed rewriting of the history textbook seeks to raise future generations of Indians on ahistorical ideas and a unity premised on falsehoods… This new history makes villains of some communities and privileges a fragmented historical narrative which is subject to the demands of community sentiments.”

Once again, an ordinary person who is determined is not entirely helpless. Who can stop any youngster from reading widely, beyond prescribed textbooks, having discussions and coming to his/her own conclusions?

Young or old, we must reclaim our minds and souls. We must reject violence, be it in the name of religion, holy shibboleths, language, or something else. We must equally reject tarring entire communities for the misdeeds of some. Fanatics and hatemongers do not come from any one community or location.