Of the 808 Pandit families in the Valley, 16 left their homes in August 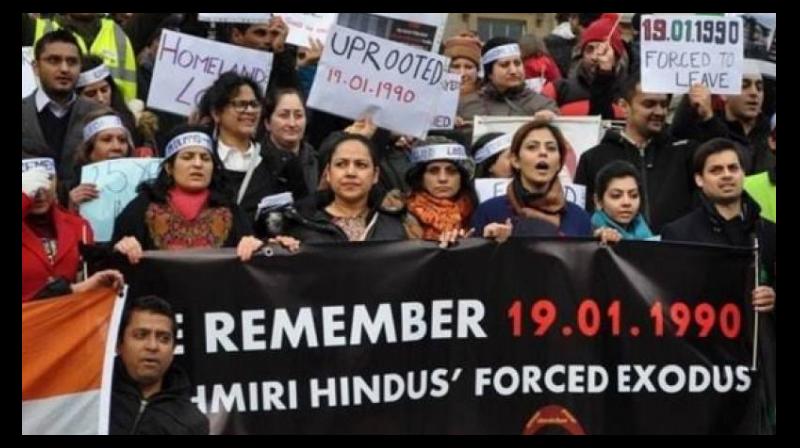 The departures aren’t by any means a flood, but when there are just 800-plus families left in the Valley, it matters when even a few go away. (Representational Image/Twitter)

Many Kashmiri Pandits who didn’t leave the Valley even in the high noon of terrorism in the early 1990s are now leaving, slowly. It’s as if the bad old days are back. The killing of Pandits on a regular basis since 2021 -- with the government at a loss to understand what’s going on -- has taken its toll.

The departures aren’t by any means a flood, but when there are just 800-plus families left in the Valley, it matters when even a few go away. Of the 808 Pandit families in the Valley, 16 left their homes in August, soon after the attack on two Pandit brothers, Sumit and Pintu Kumar, in their village Chhotigam in Shopian district, with one succumbing. Killings and bulk migrations go together.

It’s difficult to see how any plan to resettle the Pandits in Kashmir can be sustained unless circumstances change. Former PM Manmohan Singh’s scheme to reintroduce KPs to the Valley through a soft launch seemed to be going smoothly. The official focus was on bringing KP government employees back.

When on August 5, 2019 the Narendra Modi government dropped a bombshell and did away with J&K’s autonomy, signalling that now Indians from anywhere could settle in Kashmir, the fate of Dr Singh’s scheme became uncertain. The message received in Muslim-majority Kashmir was that New Delhi planned a large-scale Israeli-style population transfer.

There were around 77,000 KP families in the Valley before the onset of terrorism, according to Sanjay Kumar Tickoo, founder of the Kashmiri Pandit Sangharsh Samiti (KPSS), whose family never left. In 1992, only about 7,500 remained. In 1998, after the Wandhama killing, the figure fell to 4,500 -- such can be the impact of mass murders.

Since 2012-13, this has dropped to 808, the government says. The KPSS figure is 674. The data speaks for itself. There is something seriously wrong with the Kashmir policy. Dollops of propaganda won’t improve things even if it’s good enough to beat the communal drum elsewhere in India to harvest votes.

In Kashmir nowadays, the killings are mostly done silently. A bullet is delivered to the victim’s body and the assassin vanishes. The official theory is that the killers are “hybrid” militants: normal individuals with

no police record, who quietly pull out a silenced pistol, fire a bullet, walk on, and can’t be traced. These killers have not been identified.

J&K DGP Dilbag Singh told reporters last week there were just two dozen militants, including foreigners and locals, left in the Valley, and terrorists involved in recent killings had mostly been neutralised. Such “good news” emanating from senior officials hurts the government’s standing. Even the “hybrid” militant theory needs serious scrutiny. But this government offers no explanations. If the “hybrid” hypothesis is valid, the implications are grave.

In August, in a much-publicised statement, Mr Tickoo, the KPSS chief and a leading figure of the Pandit community, urged KPs to migrate from Kashmir. A man who stayed put through thick and thin is evidently short on confidence in the government’s capacities.

In March, in an interview to Citizens for Justice and Peace, Mr Tickoo said not a single Kashmiri Pandit had returned to the Valley after August 5, 2019, when J&K was denuded of its autonomy. This highlights the irony.

The Centre had justified its action saying this would bring in people and investments from the rest of India. But not one Pandit returned. Even Jammu’s Dogras were not tempted by the propaganda. Worse, the Pandits who stayed put even after 1990, are now quitting out of fear. We are now seeing the resurgence of terrorism in a new avatar.

The Narendra Modi government had claimed that scuttling Article 370 would draw the curtain on the separatist mindset, end the era of killings, and help inaugurate a new life. But the real change was that while stone-pelting ended, staged shootouts were reduced, fewer bombs were being hurled, the age of anonymous, silent, assassins arrived.

The intended message from the Centre was that India’s only Muslim-majority state had been subdued by a so-called “Hindu” government that wished to be seen as belligerent. The irony, however, is that the Muslims of the erstwhile J&K state (including Ladakh) are now wholly alienated; and the Hindus -- Kashmiri Pandits and Jammu’s Dogras -- and Ladakh’s Buddhists, are rising up in protest.

“Why are Kashmiri Pandits being targeted since 2021?” this writer asked Mr Tickoo in an informal telephonic conversation. The Pandit leader said he had asked Union home minister Amit Shah the same question in October 2021, when a delegation of Kashmiri Pandits met him. Ever the propagandist relying on the shallow and seemingly evident, the minister went over some data and concluded that in the Modi era there were fewer terrorist incidents; so, don’t worry.

This appears to have shocked the KPSS. What can be expected when “our protectors” are in “denial mode”, runs the sentiment. Even on the issue of basic information, New Delhi overlooks the fact that after 2003, when 24 Kashmiri Pandits were killed at Nadimarg in Pulwama district, there were no KP killings for the next 18 years. The governments of Prime Ministers Atal Behari Vajpayee and Manmohan Singh had helped to cool temperatures by adopting the template of dialogue as the very basis of India’s Kashmir policy.

Mr Tickoo noted in published interviews in the course of this year that we are back to 1990 as far as Kashmir is concerned. While comparisons can be overdrawn, key similarities can hardly be overlooked. The first is that now the BJP has untrammelled control over the nation’s policies and politics and in January 1990 too -- when terrorism unfolded with numbing speed -- the party was an influential ally of the V.P. Singh government.

There are two other striking similarities. For ideological reasons, the two entities under violent attack by Pakistan-backed terrorists in the 1990s were the National Conference party and Kashmiri Pandits. If the Valley could be rid of both, Islamabad’s game would succeed, went the belief.

Today the situation is not dissimilar. The Pandits are once again being targeted. And the NC (as well as the PDP, which didn’t exist in 1990), is under political attack and harassment -- this time by New Delhi -- day in and day out.

After the whittling of Article 370 in August 2019, its leaders were jailed along with the separatists and extremists. They have been sought to be humiliated every day since then. History is coming back to bite the Modi establishment.