Though Mr Modi is way ahead of his rivals, BJP would not want any Opposition leader to take political centrestage ahead of 2024 LS polls 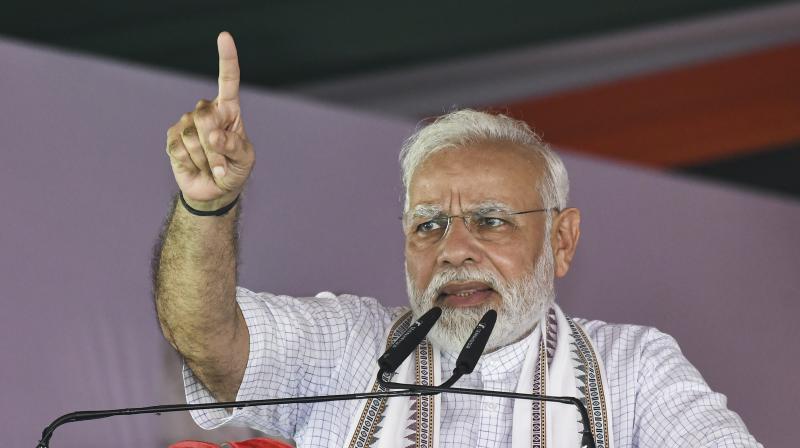 Having lampooned Rahul Gandhi successfully the BJP does not want Rahul Gandhi to disappear from the public eye because his presence further strengthens PM Modi’s case. (PTI Photo)

The manner in which the Narendra Modi government has been gunning for Congress leaders Sonia and Rahul Gandhi, it has everyone wondering about the real purpose of this relentless exercise which might just generate sympathy for them. Is it just political vendetta or is there a larger game plan afoot? One explanation is that the Bharatiya Janata Party wants to make sure that the Gandhis are not marginalised and remain politically relevant. This is particularly so in the case of Rahul Gandhi as it suits the BJP if the Nehru-Gandhi scion heads the Congress and is projected as its prime ministerial candidate. Having lampooned Rahul Gandhi successfully and discredited him as a leader of little calibre, the BJP does not want Rahul Gandhi to disappear from the public eye because his presence further strengthens Prime Minister Modi’s case if the two are pitted against each other. Though Mr Modi is way ahead of his rivals, the BJP would not want any other Opposition leader to take political centrestage ahead of the 2024 Lok Sabha polls as it may prove difficult to destroy his or her credibility.

When Congress president Sonia Gandhi was called in for questioning by the Enforcement directorate in connection with the National Herald case, party members predictably took to the streets to protest against her interrogation. Interestingly, Manish Tewari was among the leaders who courted arrest while Ghulam Nabi Azad and Anand Sharma were called in to take on the Modi government for indulging in political vendetta. These three leaders were the leading lights of the G-23 leaders who had shot off a letter to Sonia Gandhi calling for effective leadership and an organisational overhaul. More importantly, these three leaders were conspicuous by their absence when similar protests were staged by Congress members on the days Rahul Gandhi was grilled by the Enforcement Directorate. The message was loud and clear. Mr Azad, Mr Sharma and Mr Tewari from the G-23, dubbed as dissenters, wanted to make it known that they are loyal to Sonia Gandhi but have a problem accepting Rahul Gandhi’s leadership. To that extent, it was best interpreted as a vote of no-confidence against the Nehru-Gandhi scion.

Here’s more on the firebrand Trinamul Congress MP Mahua Moitra. She was last in the firing line of the Bharatiya Janata Party over her remarks on Goddess Kali and lately, the social media has been poking fun at her for trying to hide her expensive designer bag from view during the Lok Sabha debate on price rise. It is perhaps Ms Moitra’s penchant for running into unnecessary controversies which prompted the Trinamul Congress not to field her in the price rise debate. Ms Moitra’s fiery oratory has won her many fans, especially in the media, following her maiden speech when she launched a no-holds barred attack against the Modi government. Since then it is expected that Ms Moitra would be fielded by the Trinamul Congress for every important debate. However, this time it was not to be as the party felt she should lie low after the remarks on Goddess Kali kicked up a row. Needless to say, there were many in her party who were not displeased with the decision as Ms Moitra managed to steal the limelight in every session while others struggled to be noticed.

Will Uttarakhand chief minister Pushkar Singh Dhami meet the same fate as his former counterpart from Tripura Biplab Deb? This is currently the subject of ongoing discussion in private conversations of BJP leaders in the hill state. The state unit, especially the party’s legislators, is constrained from going public with their grievances since the chief minister is backed by the BJP Central leadership but they have not reconciled to Mr Dhami’s return to the top job even though he failed to win his seat in the assembly polls. On his part, Mr Dhami does not have the stature or the experience to be an effective team leader. As a result, Mr Dhami’s ministers take independent decisions while the chief minister is also happy working solo. Given the uneasy relationship between Mr Dhami and the other party leaders, it is speculated that as in the case of Tripura, the rumblings in the state unit have the potential of developing into a serious leadership crisis. Party insiders maintain it is not a question of if but when the situation will explode.

Though it was known for some time now that former Haryana Congress leader Kuldeep Bishnoi was gravitating towards the BJP, his formal entry into the party was delayed due to various reasons. The BJP leadership did not wish to rush matters as they did not want to alienate the party’s key ally, the Jannayak Janata Party, headed by Dushyant Singh Chautala, who is also the deputy chief minister of Haryana. The BJP government in Haryana is dependent on the 10-member JJP. The party obviously did not wish to upset the applecart by bringing in Mr Bishnoi whose family’s rivalry with the Chautalas is well-known as both families have their stronghold in Hisar. According to the political grapevine, a compromise formula has been worked out wherein Mr Bishnoi will focus on Lok Sabha polls while his son Bhavya will contest the state Assembly election.