Opinion   Columnists  18 Jul 2020  Anand K Sahay | Why the BJP is like the fox in the chicken coop
Opinion, Columnists 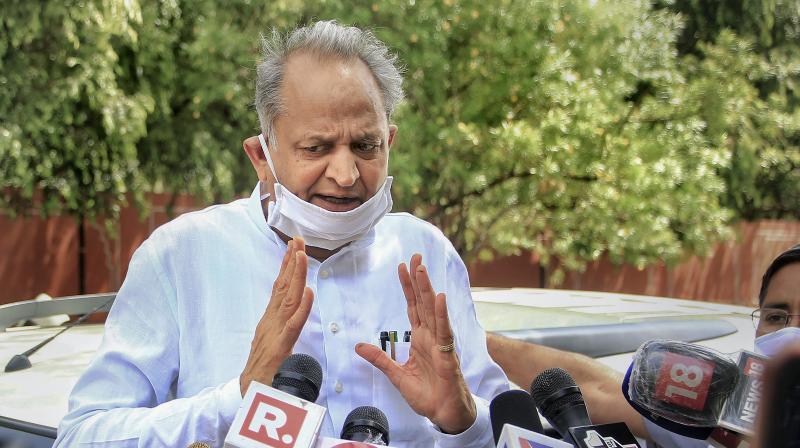 Rajasthan chief minister Ashok Gehlot has survived Sachin Pilot's challenge but there is little doubt that the BJP is out to dislodge him. (PTI)

Rajasthan is in the news because of the effort mounted to topple the Congress government in the state headed by Ashok Gehlot, a seasoned and respected leader. In the BJP’s scheme of things, it is irrelevant that the government has a clear majority, or that toppling it amounts to sabotaging the people’s verdict.

In terms of numbers in the Assembly, the BJP is considerably behind the Congress in Rajasthan (unlike in Madhya Pradesh). That is why if Sachin Pilot is able to entice too few defectors to join him in upending the Gehlot government, the BJP won’t bite after leading the ambitious young Congress deputy CM up the garden path.This is what appears to have happened so far, and the CM seems to have regained his balance.

But he will be wise to remain alert to intimations of mischief. If the Pilot ploy eventually fails, a party like the BJP is apt to think of other ways. In the time of Narendra Modi and Amit Shah, the BJP has shown itself to be a restless destabiliser of Congress governments -- or governments with a Congress component -- in the states. So, watch out, Maharashtra.

Disgruntled Congress MLAs are typically used to achieve the saffron party’s end (through a combination of allurements and threats), governors and the speaker are made errand boys, and the coercive agencies at the disposal of the Centre do their master’s bidding. Thus, who can discount the option of President’s Rule in Rajasthan if push came to shove?

As a pre-emptive measure, the only fail-safe way to prevent something like that happening is the people’s mobilisation on a large scale. But a party like the Congress is not cut of that cloth. Besides, its organisational capabilities are suspect even when it is in the Opposition, leave alone when it is the ruling party. Its capacity for infighting is the stuff of legend -- the independence movement onwards, although in the hoary past the skirmishing -- and sometimes the bloodletting -- was often traceable to ideological questions (on which basis factions took shape), not loaves and fishes.

Prime minister Narendra Modi came into office in 2014 making a string of false promises knowing that they were false -- or “chunavi jumla”, words made immortal by his ADC or Hanuman (since Hindu mythology is the flavour these days). For example, ending black money, generating mass employment, doubling agricultural income. But there was one promise on which both Modi and Amit Shah were dead serious; this was to turn India into “Congress-mukt Bharat” -- an India where there would be no Congress party.

Surprisingly, they have stumbled even on this. While a combination of empty promises and an unrelenting projection of the majoritarian spirit brought votes in the Lok Sabha election, there remained a paradox. An abysmally weak Congress still managed to put up a show in the state polls. In 2017, this emaciated party nearly put the BJP to the sword in Gujarat, the home turf of Modi-Shah, where it had been languishing. And, to their chagrin, this happened under the generalship of Rahul Gandhi, a man the energies of the BJP-RSS had been devoted to degrading and lampooning.

It is to deal with this paradox that the Modi government at the Centre has been on the rampage against the Congress -- like a fox attacking the chicken coop --especially when the latter wins state elections. It is clear this is not just political policy, but an article of faith. Only when the Congress is driven into the ground can the BJP-RSS realistically hope to rule over India and turn it into a Hindutva leisure ground.

If BJP weren’t a party with a proven track record of toppling a succession of Congress governments in the states, Gehlot’s deputy is unlikely to have embarked on his present enterprise. And nor would Jyotiraditya Scindia have become a turncoat. Such men wouldn’t have dared, though it is clear they are not in politics for the sake of ideology and the spirit of service. They are there to serve particular ambitions (in the Congress too, they enjoyed enormous power and privilege handed to them by fellow dynasts, who are a poor judge of character), as on a corporate ladder.

And why is it the BJP alone that attracts such political carpetbaggers? The straightforward reason is that this party alone has the resources to throw at prospective defectors. Finding the resources has been made easy since gaining power at the Centre in 2014. A scheme like the electoral bonds, for instance, is tailor-made for this. The Association of Democratic Reforms estimates that 94.5 per cent of all electoral bond collections, before the 2019 parliamentary election, went to the BJP.

That would suggest that the scheme was brought to benefit just this one party.  So suspicious is the idea that even the Election Commission, which has so conspicuously lost its bite, has wondered aloud about it. The recently created PM-Cares may turn out to be something similar. It is not a central governmental fund (coming under government auditors) in spite of its name, which may have been adopted as a trick.

We just saw in Rajasthan how desperate anti-Congress forces can get. Raids on Gehlot’s backers accompanied the moves to topple his government. When “Operation Topple” was on in Madhya Pradesh a few months ago, a nephew and some associates of chief minister Kamal Nath were raided. In Maharashtra last year, as Sharad Pawar was playing an active role to cobble together an alliance of his party and the Congress with the Shiv Sena, denying the BJP a chance to return to power in the state, he got a summons from the Enforcement Directorate in Mumbai. Earlier, in Karnataka, where the Congress-JD(S) government was torpedoed through shenanigans involving the state governor (and late speaker), dynamic Congress leader D.K. Shivakumar, who was later made state Congress president, had his business premises raided repeatedly and was thrown into jail.

The debasement of the aims of politics allied with immorality of intent has, more and more in recent years, produced the end result of scuttling the popular verdict secured through the design written in the Constitution. In each case, the beneficiary has been the governing party at the Centre.