Why is Didi’s tableau rejected? And Stalin’s and Pinarayi Vijayan’s? Isn’t this a bit too blatant and obvious? 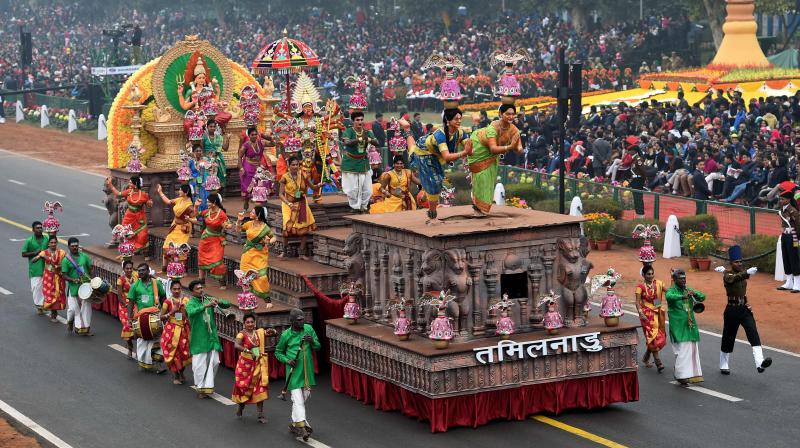 Listen up, you mysterious, anonymous members of the selection committee that grandly and arbitrarily decides which state tableaux are worthy enough to glide down Rajpath on India’s 73rd Republic Day — speak now or hold your peace forever! What’s all this? Why is Didi’s tableau rejected? And Stalin’s and Pinarayi Vijayan’s? Isn’t this a bit too blatant and obvious? You have an issue with the three CMs who’ve refused to toe the line and asserted themselves through their wins — that’s your problem. As citizens, we want to see as many tableaux representing diverse narratives as time allows. Don’t make the shortage of time an excuse! Get your act together and make sure every single state gets a slot. But clearly, your mandate is different. At least, have the decency to explain why these tableaux were rejected. On what basis? Aesthetics or politics?

Mamata says no “reasons or justifications were assigned” by the Centre. But hello! West Bengal did want to celebrate the 125th birth anniversary of Netaji Subhash Chandra Bose. And Tamil Nadu had the temerity to present freedom fighters, as its theme. Kerala, in a “shocking” move, wanted its tableau to showcase anti-caste crusader and reformer Narayana Guru! Relax, citizens… it’s just a coincidence these tableaux were rejected! Theek hai?

The Republic Day Parade is — or at least, used to be — a matter of Indian pride. Our hearts would swell just watching the splendor, grandeur and immense cultural diversity that so beautifully defines our nation. Of course, some of those early 1960s tableaux were ghastly, and in terms of design, also very cringe-making. So what? Each participating tableau made a sincere, if clumsy, attempt to showcase the state’s unique strengths and identity. The floats provided easy-to-figure patriotic messages, particularly to school kids who would pick up an instant history lesson or feel curious about a geographical detail they may have been unaware of. As a schoolgirl growing up in Delhi, I would wait impatiently for the tableaux and thrill to their visual variety.

Some would feature live dances -- from Kathakali to Bhangra. Others would go back to the states’ history and have actors playing well-known icons, reciting poetry, singing songs, making speeches. The costumes would have us gasping at the vivid colours, mirrors, feathers, beads, and other amazing embellishments. The tableaux were the highlights of the parade, till we’d hear the purr of the jets approaching from a distance and stare skywards, cheering wildly for the tricolour plumes signalling the end of the parade.

To see this inspiring spectacle that made our spirits soar reduced to a tawdry political game of one-upmanship is insulting and downright petty.

Which is why I decided to design my own tableau this year -- just to make a point! Of course, it is all inside my mind… but at least it’s there! And I feel good that I am able to assert my right as a citizen of India, to present whatever I believe is fair and right, in the manner I choose to. Wouldn’t it be amazing if in future we could organise neighbourhood tableaux on Republic Day without State interference?

This year, for example, I would have liked to focus on “Uttar Pradesh Uncut” — and create a tableau that presents the real story of Yogi minus fictitious flourishes. Or I’d have liked to take a crack at a tableau about our country’s obsession with statues, especially since our beloved and great Prime Minister has announced his latest statue project — the Statue of Equality, a Rs 1,000-crore endeavour outside Hyderabad to mark the 1,000th birth anniversary of Bhakti Saint Sri Ramanujacharya. Arrey Baba… first strive for equality in reality. Then build the statue, na? What’s the point of a statue that reminds us, in a harsh and cruel way, that the country is anything but equal. By spending so much on a statue, will equality automatically follow? If the genuine objective is to generate such a sentiment, start by demonstrating it through policies and actions.

This tableaux discrimination only displays insecurity. Regardless of which chief minister wants to project what narrative through the tableau, surely it’s up to the CM’s discretion? Perhaps, the subject of the tableau doesn’t sit well with the mood of the ruling party… so what? A lot of things don’t sit well about the ruling party for a large number of citizens… but does that inhibit our leaders? Vehicles of propaganda, as tableaux generally are, can’t be the monopoly of the ruling party. Assuming some of the rejected tableaux featured themes that go against the ruling party’s image machine, they should still have got clearance — let citizens decide! I am all for the democratisation of tableaux… after all, Stalin is not a brigand and Mamata is not Phoolan Devi. Nor is Pinarayi Vijayan an “unpadh”. It seems churlish to reject their tableaux and pass the buck to some unidentified “selection committee”, without providing valid grounds for dumping the tableaux and citing hollow time constraint claims.

A state tableau need not be self-consciously “non-political”. On the contrary, the Republic Day parade provides a terrific opportunity to get a message across, provided the message is in the public interest and not something that could lead to rioting or unrest on the streets.

Grand-standing is the prerogative of all leaders… but in India, it’s reserved for the Prime Minister and his team. A confident leader is not afraid of mirrors. Tableaux are those mirrors in public that encourage citizens to look, think, decide. And that’s the problem! With key elections coming up, it’s easier to dazzle citizens with drones! Great idea, btw, but also a shrewd distraction.

I still have a few days to put the final touches on my personal tableau. Dressing up like Yogi is pretty easy… no elaborate fancy dress required.

Speaking his lingo is harder, but not impossible. I don’t wish to stick on a grey beard and pretend I am Namo, but I do have several colour coordinated bundis, angavastrams and sandals. I look good in safaas and turbans… so that’s not a problem. Since the parade in Delhi is without a chief guest this year, I would like to invite the Djoker! I believe he doesn’t need a visa to come to India… and his aggression is a quality everybody gets. Of course, I will persuade him to get vaxxed on camera after placing him on the podium. There can’t be a better endorsement for India’s vaccination programme than Novak Djokovic flying in and getting a Namo drone to jab him as the world cheers.

What a shot in the arm that will be for our monumental and genuine achievement of having vaccinated over a billion people. Now to hunt for sponsors…